The Internet chanced upon their Instagram exchange, which Farhan Akhtar and Shibani Dandekar had earlier this week 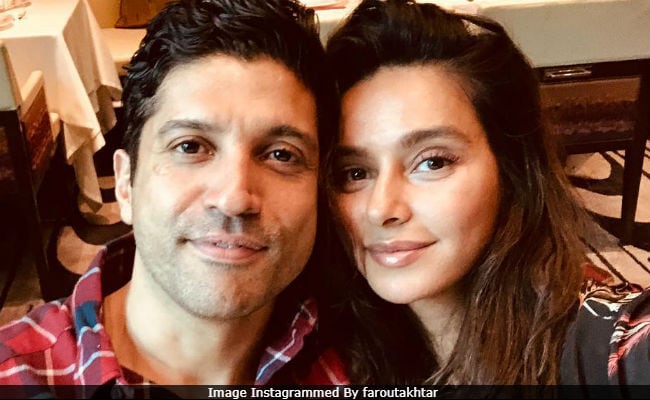 Actor Farhan Akhtar and TV presenter Shibani Dandekar, who are reportedly dating, found a spot on Wednesday's list of trends, after the Internet chanced upon their Instagram exchange, which they had earlier this week. On Monday, Shibani shared a throwback picture of herself, in which she looked chic in a cut-out halter tee and thigh-high boots. Farhan simply commented on the post with a "hey," along with a popped-up eye emoticon, after which Shibani replied to him via a cheeky emoji. "Throwing it back on this fine Monday," Shibani captioned her post, in which comments from designer Masaba Gupta and actress Rhea Chakraborty have also been posted.

Farhan is currently in Delhi to shoot for his forthcoming film The Sky Is Pink, along with Priyanka Chopra. Looks like Shibani also joined him in Delhi and the rumoured couple met some of the friends in the national capital.

Farhan shared this picture from the get-together.

He also posted this solo picture with Shibani a week ago.

Look who I bumped into! So great seeing you @shibanidandekar

Last month, Farhan Akhtar made his rumoured relationship Instagram official by sharing a picture with Shibani, which was earlier posted on her Instagram profile a few months ago. In the picture, they walk hand-in-hand and Farhan accompanied the post along with a heart emoticon.

The rumoured couple haven't admitted to dating as of yet. Farhan Akhtar and Shibani Dandekar met on the sets of 2015 TV show I Can Do That, hosted by him.

Farhan was previously married to celebrity hairstylist Adhuna Bhabani. They got divorced in April 2017. The ex-couple are parents to daughters Shakya and Akira.