'Why No Women In This Room?' Dia Mirza To Akshay Kumar On Film Delegation's Meeting With PM Modi

"This is wonderful. Is there a reason why there were no women in this room?" tweeted Dia Mirza 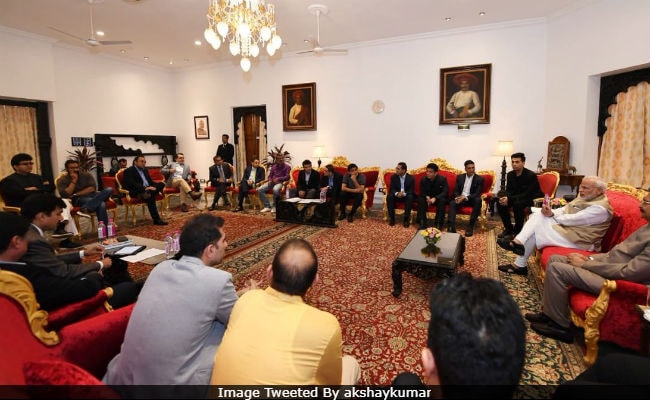 In a strongly-worded tweet to superstar Akshay Kumar, actress Dia Mirza asked why no female members from the film industry were included in the panel which met Prime Minister Narendra Modi earlier this week. The film delegation's meeting with PM Modi has invited a barrage of criticism over the exclusion of women. Quoting a tweet by Akshay Kumar, in which he thanked PM Modi for "discussing the issues pertaining to the industry" and "assuring positive consideration of suggestions," Dia wrote, "This is wonderful. Is there a reason why there were no women in this room?" In the photo tweeted by the 51-year-old actor, the entire delegation can be seen interacting with PM Modi.

"Wish one of the men had asked this question. How can an entire industry be represented only by men?" read Dia Mirza's second tweet.

This is wonderful! Is there a reason why there were no women in this room? @akshaykumarhttps://t.co/oO9teT3Gyi

True. Wish one of the men had asked this question. How can an entire Industry be represented only by men? https://t.co/SqeRGFT3FV

I'm so glad you see the merit in the question @hegdepoojahttps://t.co/epIquyvRMO

Actress Sandhya Mridul too reacted strongly to Akshay Kumar's post and wrote, "Great. We women have no issues to discuss, obviously."

Great. We women have no issues to discuss. Obviously. https://t.co/iOlwnd7sZB

Meanwhile, Lipstick Under My Burkha director Alankrita Shrivastava tweeted, "Would be great to have female representation in these delegations. It is 2018."

Would be great to have female representation in these delegations. It is 2018. https://t.co/HoxGbptgwX

"I believe women are equal stakeholders in the film industry and overall in the Indian economy. Policies that concern the film industry should be discussed and shaped by collectives that have equal representation of women. We cannot just assume that only men somehow know everything and will decide everything," she told news agency IANS.

An 18-member panel, including actors like Akshay Kumar, Ajay Devgn, filmmakers Karan Johar, Siddharth Roy Kapur, Ritesh Sidhwani and Central Board of Film Certification (CBFC) chief Prasoon Joshi, met PM Modi on Tuesday. "The main agenda to discuss with PM Modi was what the entertainment industry in India can contribute as a soft power of the nation around the world and how it would be wonderful if the government could encourage this industry in very tangible ways to be able to grow and thrive," Siddharth Roy Kapur told IANS after the meeting.

Karan Johar posted a picture with PM Modi and wrote:

It was enlightening to hear the honourable Prime Minsiter @narendramodi share his views on our Industry's soft power status and the strength of our cinema...he gave our media and entertainment representatives a patient and solid hearing....thank you Sir!!

Filmmakers such as Leena Yadav and Guneet Monga, among others have also criticised the panel for excluding women.