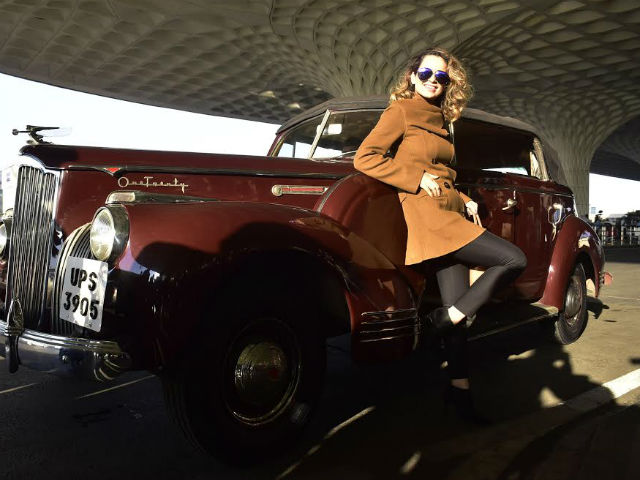 Rangoon: Kangana Ranaut features as filmstar in the film

New Delhi: Kangana Ranaut, who will be seen as a film star named 'Jaanbaaz Miss Julia' in Vishal Bhardwaj's period piece Rangoon, said that the film is a perfect Women's Day watch as it's about a strong woman, reported news agency IANS. "In Rangoon, Julia is a strong female character and the story revolves around her. Therefore, I believe that this film is quite important for Women's Day and perfect to enjoy on that occasion," Kangana told IANS. The film is a romantic drama set during World War II and also features Saif Ali Khan and Shahid Kapoor in pivotal roles. Saif, 46, plays plays a film producer and Miss Julia's paramour while Shahid, 35, features as a soldier named Nawab Malik.


Kangana, 30, promoted Rangoon at the Border Security Force (BSF) frontier headquarters in Jammu on Tuesday. The actress arrived in an open gypsy and interacted with the jawans and their families.

Previously, she promoted the film in Jaipur and was driven around in a vintage car, in character as Jaanbaaz Julia. "I felt very nice riding the vintage car. It's a new experience for me," Kangana told IANS.

Check out these pictures of Miss Julia from Rangoon's promotion diaries:

Interacting with the BSF Jawaans was an absolute honor for #KanganaRanaut and the entire team! #RangoonPromotionspic.twitter.com/lHNIxT2YRc

Rangoon, set in Myanmar or Burma as it was known then, has been majorly shot in Arunachal Pradesh. The film releases on February 24.

Promoted
Listen to the latest songs, only on JioSaavn.com
About the genre of the film, director Vishal Bharadwaj earlier said that Rangoon is less a war film and more a love triangle. Kangana Ranaut has collaborated with Mr Bhardwaj for the first time. He previously directed Saif Ali Khan in Omkara and Shahid Kapoor in Kaminey and Haider.