Can You Guess The Other Legend In Anupam Kher's Throwback Pic With Dilip Kumar? 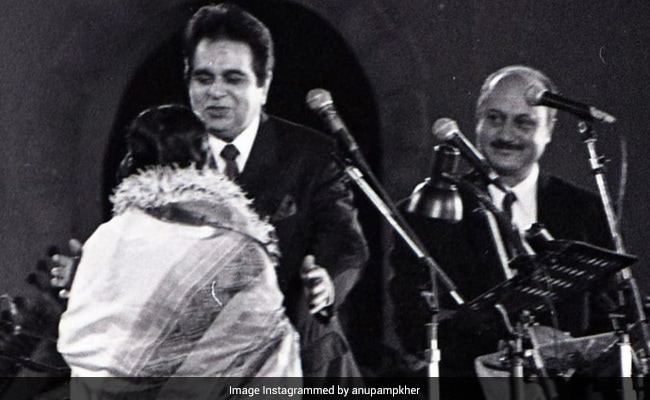 Sometimes, certain events stick to us so strongly that we carry them in our memories and later bring them out to relish those gems of the past. Actor Anupam Kher has many of these gems stacked into his bag of memories and he has brought out one of his black-and-white photos to warm our hearts. His latest Instagram post shows a photo of himself standing on a stage beside the late actor Dilip Kumar, who is seen talking to a woman whose face we cannot see. The photo is a touching reminder of the Bollywood legend Dilip Kumar who died on July 7 this year.

However, Anupam Kher's post is puzzling many of us as he refuses to name the woman in the photo. Instead, he asks us to guess her identity. Fans and followers have taken up the job seriously. While some are guessing her to be Asha Bhosle or Jaya Bachchan, the comment section is mostly flooded with one name: Lata Mangeshkar.

Anupam Kher often starts a wave of nostalgia among his followers with old photographs or videos. On the day of the actor's death, he shared a clip of Dilip Kumar reciting a touching shayari on the transience of life. Fans could not help but pour their heartache into the comments. Anupam Kher wrote in the caption, "The Great Dilip Saab."

Anupam Kher shared another of his vintage treasures last month. The photo shows Anupam Kher in a casual chat with his wife, actress Kirron Kher, Jeetendra and Sobha Kapoor. The photo sent him down memory lane to days of fun, laughter and stories. He wrote, “Life moves on, but memories don't. I found this picture of Jeetu Ji, Shobha Ji, Kirron and [me] in a book... I really miss us."

While Anupam Kher makes his occasional dips in his bag of memories, he also dedicates time for his work. He is currently working on The Kashmir Files and The Last Show.