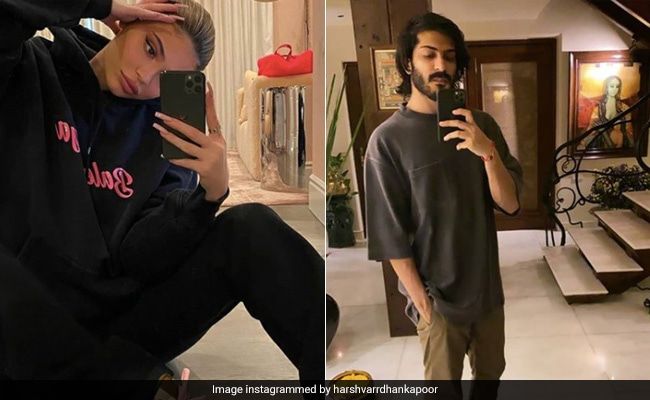 Harshvardhan Kapoor, who is as big a fan of sneakers as his brother-in-law Anand Ahuja, got us pondering over a fashion question. The Bhavesh Joshi actor, who fills up his feed with updates about his favourite sneakers, shared a photo of himself sporting Nike's Stussy x Dunk Low Pro SB 'Cherry' sneakers, which were originally released in 2005, have a cult status in the sneaker world and come with a whopping price tag. Harshvardhan didn't just share his photo but also added a photo of Kylie Jenner styling the same sneaker model with a pair of sweat pants to the album. "Who wore it better?" Harshvardhan asked his Instafam along with the wink smiley.

Who wore it better?

This is what Kylie Jenner, quarantined at home during the lockdown, had posted with lyrics borrowed from Tyga and Curtis Roach's Bored In The House.

Anand Ahuja dropped in in the comments section on Harshvardhan's post with views of his own and said it's a "tough" decision to make! "Tough competition bro... hard to compare a guys great fit with a girls great fit. The girl will always win. Just like cars - a girl driving a nice car well will always > a guy driving a nice car well! Just the way of the world," read his comment. 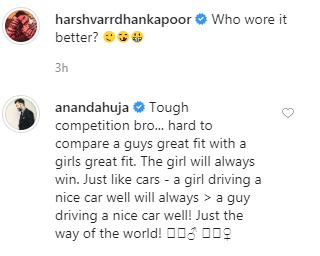 Actually the love for sneakers runs in the family. Anand had shared then and now photos of Anil Kapoor sometime in 2018 and in both the photos Anil Kapoor can be seen wearing similar sneakers. "Nike then (in Saheb, 1984) and Nike now (in Race 3)," Anand Ahuja reminded.

"We won't be distracted by comparison if we're captivated by purpose." 1984 , 2018.... .... proof that India is ready and has been ready ... never underestimate and never settle for less. @nike @virgilabloh take note! ... @purevnv @bhanelove represent!!

PS - Anand Ahuja wore sneakers to his own wedding reception. He paired it with his sherwani and looked like a rockstar.