"So, so proud of you," wrote Jacqueline Fernandez 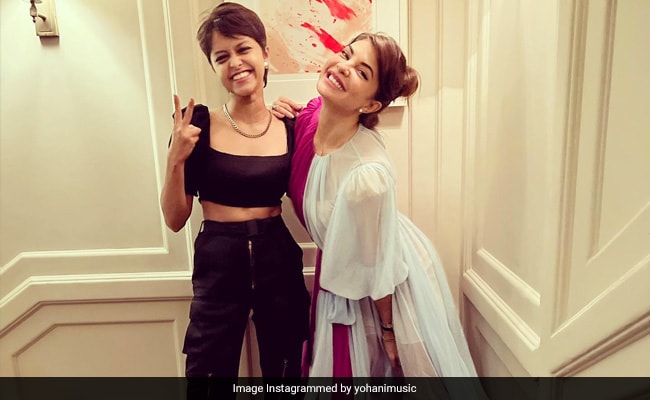 Sri Lankan singer Yohani, who became an Internet sensation after the release of her Manike Maghe Hithe cover, recently had a fangirl moment, glimpses from which she shared on her Instagram profile on Thursday. The 28-year-old singer shared a set of pictures with Bollywood star and former Miss Sri Lanka Jacqueline Fernandez. Yohani looks uber-cool in the pictures, dressed in a black outfit, while Jacqueline Fernandez can be seen wearing a white dress and she looks pretty as ever. Sharing the pictures, she captioned them: "#starstruck ... #SriLankan." In the comments, the singer wrote for Jacqueline: "Thank you for all the support. Means a lot." Replying to which, the Kick actress wrote: "So, so proud of you."

This is what Yohani posted:

Yohani became a star with Manike Maghe Hithe, a popular cover of a song that went viral and is everywhere. In an exclusive interview with NDTV last month, Yohani spoke about the kind of response the song received. She said that Priyanka Chopra sharing her song was "crazy." Yohani also said that she wishes to collaborate with Indian composers and singers. She also stated that she would love to work with AR Rahman someday.

Jacqueline Fernandez, who was crowned Miss Sri Lanka 2006, made her debut in Bollywood with the 2009 film Aladin. She went on to feature alongside Salman Khan in several films like Kick and Race 3. The duo will once again collaborate for Kick sequel. The actress has also starred in films such as Murder 2, Race 2, Housefull 2, Housefull 3, Judwaa 2, Mrs Serial Killer and Drive to name a few.

The actress' impressive line-up of films includes Bachchan Pandey, alongside Akshay Kumar and Kriti Sanon. She has also signed Ram Setu with Akshay Kumar and Nushrratt Bharuccha. She will also be seen in Attack, opposite John Abraham. The actress will also star in Rohit Shetty's Cirkus, starring Ranveer Singh, and Bhoot Police with Saif Ali Khan, Arjun Kapoor and Yami Gautam. She will also feature in Badshah's music video Paani Paani. She was last seen in the song Dil De Diya from Salman Khan's film Radhe.