When Salman Khan Surprised The Team Of Fukrey Returns 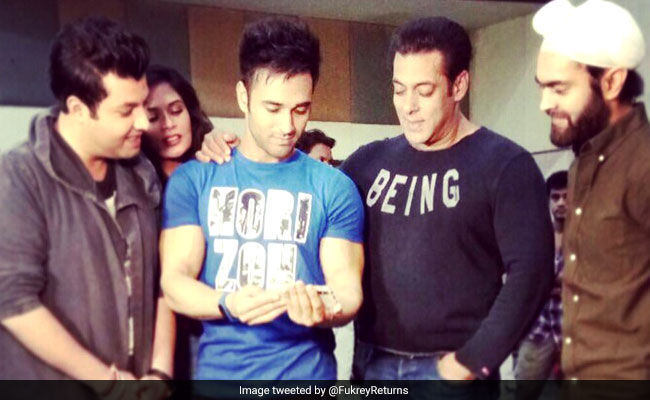 New Delhi: Guess who made a surprise visit to Choocha (Varun Sharma) and Bholi Punjaban (Richa Chadha) on the sets of Fukrey Returns? He was none other than our favourite star Salman Khan. The fukras couldn't hold their excitement when Salman Khan gave the most amazing surprise to the team at Mehboob Studio in Mumbai on Saturday.Peh Gaya Khalara and Mehboobaare the two songs, which have been released by the makers of the film so far, and they are all set with a new song titled Tu Mera Bhai Nahi. Salman not only surprised them but also appreciated their upcoming song. Nothing could have been better for the fukras to receive appreciation from the bhai himself.

The Fukras can't hold their Excitement when the Super Amazing @BeingSalmanKhan Sir Gives the mosttt amazing Surprise Thank you so much Sir!! We Love You!!#fukreyreturnspic.twitter.com/7YrXhERaxi

Fukrey Returns is a sequel to 2013 sleeper hit Fukrey. Most of the film's cast - Pulkit Samrat, Varun Sharma, Ali Fazal, Manjot Singh and Richa Chadha - are reprising their roles. Fukrey ended with Bholi Punjaban's arrest and now after three years after she completes her jail term, Bholi Punjaban vows to make Hunny, Choocha, Zafar and Lali's life hell. Hunny and Choocha have also upped their game with a treasure hunt.

Promoted
Listen to the latest songs, only on JioSaavn.com
Have you seen Fukrey Returns trailer yet?


Salman Khan, who is currently prepping for Race 3, is awaiting the release of his much-awaited film Tiger Zinda Hai, co-starring Katrina Kaif. The film is a sequel to Salman and Katrina's 2012 hit Ek Tha Tiger.Tiger Zinda Hai will hit the screens on December 22 while the Fukrey boys will meet you on December 8.