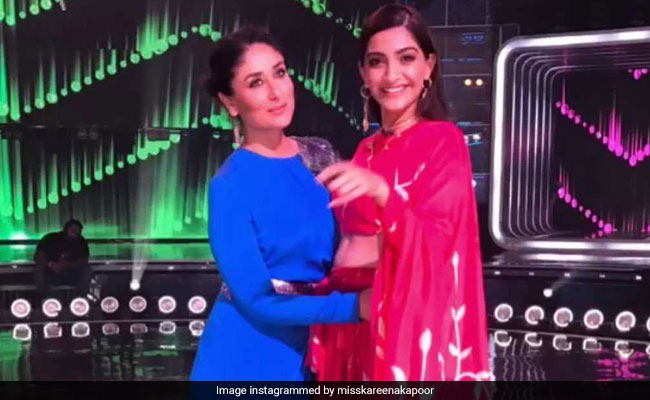 Kareena and Sonam on the sets of Dance India Dance. (Image courtesy: misskareenakapoor)

It was a Veere Di Wedding reunion of sorts for Kareena Kapoor and Sonam Kapoor on the sets of the TV dance reality show Dance India Dance, where Kareena Kapoor happens to be one of the judges. Sonam, who is currently busy with the promotional duties of her forthcoming film The Zoya Factor visited the sets of the show and what happened when she did? Well, the duo danced to their popular track Tareefan from the 2018 film Veere Di Wedding. The video of both the actresses grooving to the song is going insanely viral on social media and we are not surprised at all (given the massive popularity of both the actresses).

They are the best!

We also chanced upon pictures of the actresses from the sets of the show, which were shared by several fan clubs on social media. Kareena looked stunning in a blue gown, while Sonam opted for a traditional pink suit. Take a look at the picture here:

On the work front, Sonam Kapoor was last seen in Shelly Chopra Dhar's Ek Ladki Ko Dekha Toh Aisa Laga, co-starring Anil Kapoor and Rajkummar Rao. She awaits the release of The Zoya Factor, in which she co-stars with Dulquer Salmaan.