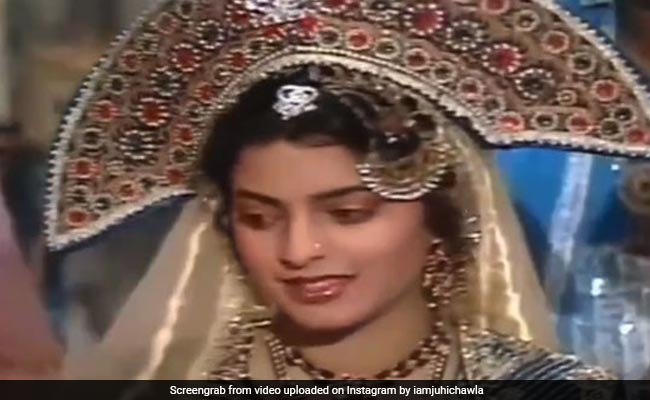 Juhi Chawla in a still from the clip. (Image courtesy: iamjuhichawla)

Actress Juhi Chawla occupied a spot on the list of trends on Sunday after she reshared a throwback clip of herself from BR Chopra's 1986 serial Bahadur Shah Zafar. The clip was originally posted by a fan club dedicated to the actress with this caption: "Can you guess? So young, Juhi Chawla." Resharing the video on her Instagram profile, Juhi Chawla revealed that she "kept forgetting her lines" on the sets of the show but late filmmaker BR Chopra's son Ravi Chopra, who was directing the series, "didn't lose his patience even once and told her to be calm." Juhi Chawla starred as Noor Jehan in Bahadur Shah Zafar that also featured Mukesh Khanna, Ashok Kumar, Raj Babbar and Gufi Paintal, to name a few.

"Throwback Alert! BR Chopra ji's serial where they gave me an important guest appearance. It was a one-day shoot, I remember I was very, very new and so nervous that during the shot I kept forgetting my lines. Ravi Chopra ji was directing and he didn't lose his patience even once, kept telling me to be calm... to relax... he was very kind," wrote the actress.

She also thanked the fan page for sharing the vintage video: "Further, I'd like to thank Best Of Juhi (fab club's name) who dug this clip up. After this shoot which may have been way back in 1987, I never ever saw it and today is the first time after all these years ...and I'm amazed I could say these lines... or even express I have no idea what I did ... and what Chopra Ji saw in me, why he cast me .... and now, I see it. TV Serial: Bahadur Shah Zafar."

The throwback video has now gone viral on social media. Check it out here:

Juhi Chawla stepped into Bollywood with 1986's Sultanat but her first film as a lead actress was 1988's Qayamat Se Qayamat Tak, in which she co-starred with Aamir Khan.

Juhi, who was one of the top actresses of Bollywood in the Nineties, has featured in several films like Amar Prem, Chandni, Swarg, Pratibandh, Ishq and Mr. and Mrs. Khiladi, among many others.