When John Abraham Took Over A Ticket Window For Mumbai Saga 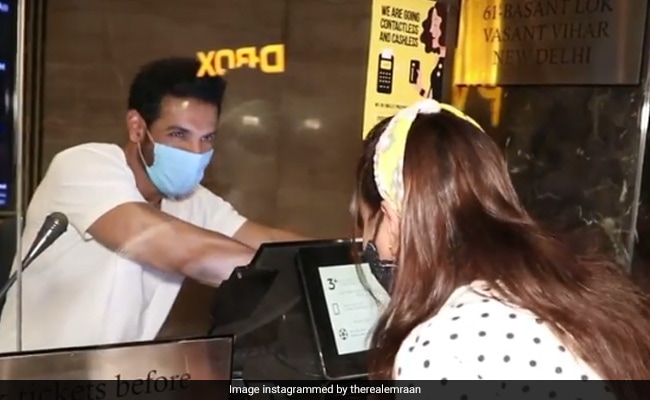 John Abraham in a still from the video. (courtesy: therealemraan)

As Mumbai Saga released on Friday, the film's lead actors John Abraham and Emraan Hashmi shared a video on social media, in which they can be seen requesting their fans to come and watch the film in theatres. As a film's promotional activity, John Abraham sold Mumbai Saga tickets. In the video, John can be seen sitting at a ticket counter and selling them. Emraan Hashmi, sharing the video on social media, captioned it: "Amartya and Vijay invite you to watch the biggest face-off of the year on the big screen, the best way to watch it. Follow all the safety norms, be safe and enjoy the saga of the year. Book your tickets now."

Mumbai Saga opened to largely mixed reviews from film critics. In his review for NDTV, film critic Saibal Chatterjee gave the film 2 stars out of 5 and he wrote: "Mumbai Saga, for all its guts and gore, goes all soggy, and soppy, in the finale. There is a younger brother that the hero is determined to save from harm. Trapped in superficialities and cliched tropes, the film itself could have used a rescue act."

Mumbai Saga was earlier scheduled for a June 2020 release but the production work was put on halt due to the coronavirus outbreak and nation-wide lockdown, last year. The film has been directed by Sanjay Gupta and it has been produced by Bhushan and Krishan Kumar under their banner T-Series. Mumbai Saga, which also stars Jackie Shroff, Suniel Shetty, Prateik Babbar, Gulshan Grover, Rohit Roy, and Amole Gupte in pivotal roles, is set in the Eighties and the Nineties.