Daawat on Wheels: Aditya Roy Kapur, Parineeti Chopra and a Game of Bikes 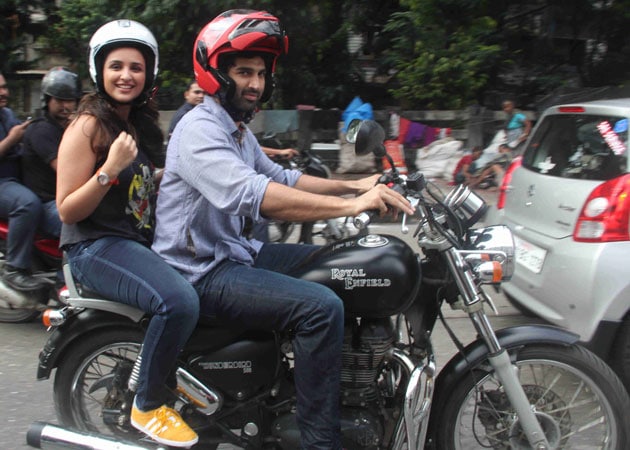 Actress Parineeti Chopra doesn't like riding pillion especially not when it's the Game of bikes. (Image courtesy: Varinder Chawla)

Clearly actress Parineeti Chopra doesn't like riding pillion especially not when it's the Game of bikes.

Parineeti, who has embarked on a scrumptious road journey with actor Aditya Roy Kapur to promote their upcoming film Daawat-e-Ishq, would have loved to take the lead but couldn't swing it with Aditya in-charge.

The actors rode on a bike to reach a Parsi food joint near Mumbai. When the actor was congratulated on handling the traffic madness well, Parineeti quickly pitched in (all in good humour), "That is the only thing he knows how to do well." (Also Read:I Always Knew I Was Hero Material, Says Aditya Roy Kapur)

The playful banter did not end there. Parineeti said that for the next leg she would be driving around the city, "With Aditya nowhere in my car," to which Aditya promptly replied, "I'd rather not expire."

Parineeti further said that she is not nervous of bikes and loves riding them. She said that she does it for her films, last one being Ishaqzaade. But the actress loves her cars.

The pair is out promoting the film via a multi city road trip called 'food yatra'. Their itinerary is set to cover the best places offering delicious food.

Though normally stars prefer staying away from food high in calories, while they are promoting their movies, this set wants to chomp on the best delicacies various cities have on offer. In this snippet, Parineeti and Aditya, who are self-confessed foodies, are seen confessing that Aditya knows all about the food as they try out multiple cuisines.

The 'food yatra' is the main reason why the release date of the film was pushed from September 5 to September 21.

Promoted
Listen to the latest songs, only on JioSaavn.com
Talking about the movie, Parineeti and Aditya have earlier said that the YRF film, directed by Habib Faisal (of Ishaqzaade fame) is a celebration of food and love.