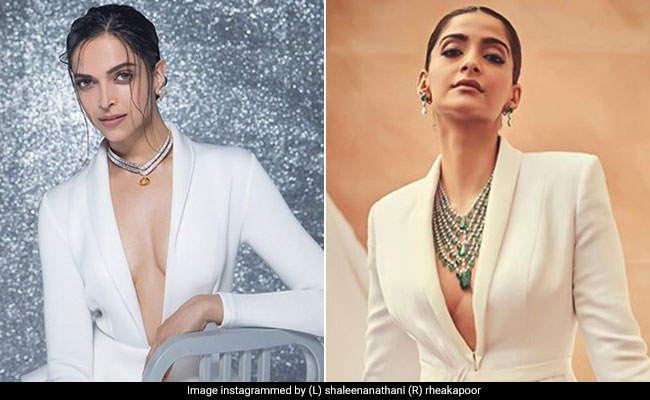 Actress Deepika Padukone recently featured in a photoshoot for an advert for jewellery brand Tanishq, photos from which have created quite a stir amongst the fashion police on Instagram. In one of the pictures posted on Shaleena Nathani's Instagram, Deepika can be seen posing in a white pantsuit with a plunging neckline and her outfit reminded the Internet of Sonam Kapoor's Ralph and Russo tuxedo from Cannes: "She's always copying Sonam," read a harsh comment while another user added: "Why does she remind me of Sonam?" Meanwhile, another section of Shaleena's Instafam highlighted: "How much photoshop they have done to her pretty face?"

Deepika Padukone's skin tone and particularly her nose in two of pictures from the photoshoot seemed a bit unreal to netizens, who couldn't help but ask: "What's with her nose?" Comments such as: "Deepika, what's up with photoshopping your pictures?", "bad photoshop" and "too much editing" poured down on Shaleena's feed.

Here are Deepika's pictures from the recently shot advert:

When in Cannes, Sonam Kapoor made her red carpet debut this year looking like this - complete with Chopard accessories.

@sonamkapoor tonight for the premiere of Once Upon A Time in Hollywood tonight at the #cannesfilmfestival for @chopard In @ralphandrusso haute couture. Shoes by @jimmychoo

Meanwhile, Deepika Padukone is often criticised for playing a safe fashion game at international fashion galas but her head-turning Cannes appearances this year appeared to change that idea. She wore an OTT Peter Dundas gown for Day 1 and then styled a lime green Giambattista Valli ruffled gown with a turban for her Day 2 look.

Even international media cheered for Deepika Padukone's 'camp'-inspired look in a Zac Posen gown for the Met Gala this year.

Deepika Padukone has been subjected to brutal trolling in the past. She was previously body-shamed for a Vanity Fair photoshoot and told to "eat a burger" for looking "malnourished." She was also trolled for Maxim's June-July 2017 cover shoot, for which she paired a crop top with high-waist shorts.