Cannes 2019: Once Upon A Time On The Red Carpet, Sonam Kapoor In A Tuxedo 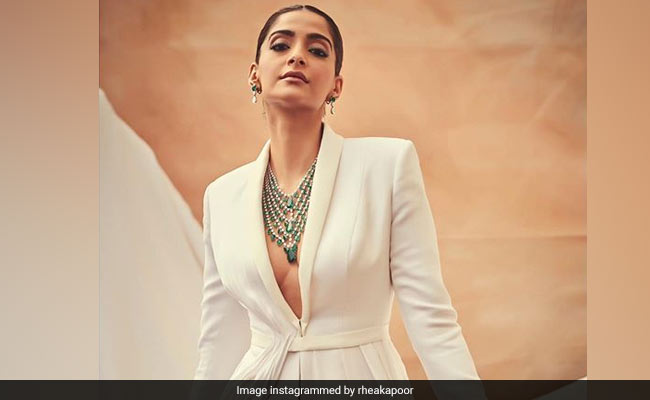 Sonam Kapoor's first red carpet look this Cannes is by her go-to international designer Ralph & Russo - an ivory tuxedo made special by a train. Sonam accessorized with some major bling from Chopard, for whom she launched a new collection earlier in the day. Sonam Kapoor, a Cannes regular, made some daytime appearances at the film festival on Monday and attended her first red carpet event on Tuesday - the screening of Quentin Tarantino's hotly anticipated Once Upon A Time In Hollywood, starring Leonardo DiCaprio and Brad Pitt. Sonam's sister Rhea Kapoor, who helps style her, posted pictures of Sonam in her tuxedo, looking sharp and glamorous. Have a look at her pictures here:

I had the incredible honour of Launching the incredible collection Garden Of Kings from @chopard It promotes sustainable luxury and is made of precious materials from nature. What a moving story behind everyone of the #chopardparfums from this collection. custom @ashistudio

Monday was a day of several outfit changes. Sonam Kapoor began in a scarlet Valentino maxidress; next, she did press in purple Elie Saab; Sonam wrapped it up in a silver concoction by Abu-Sandeep at a Chopard party.

Sonam Kapoor has been going to Cannes for several years now as a L'Oreal ambassador. Her fellow ambassadors Deepika Padukone and Aishwarya Rai Bachchan have both walked the Cannes red carpet this year, as have actresses Priyanka Chopra, Kangana Ranaut, Huma Qureshi, Diana Penty and Hina Khan.

Back home, Sonam Kapoor and Aishwarya Rai Bachchan both feature in an ugly controversy about a meme that actor Vivek Oberoi tweeted - the meme uses pictures of Aishwarya and has been criticised widely by many, among them Sonam who denounced the tweet as "disgusting and classless."