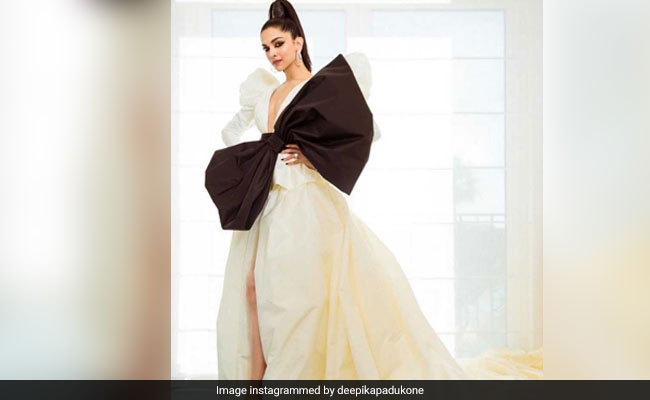 Actress Deepika Padukone had to rush into his air and makeup almost directly from Nice airport but there was no sign of travel fatigue as she walked the red carpet at the 72nd Cannes Film Festival on Thursday wearing a cream gown by Peter Dundas, finished with an exaggerated chocolate brown bow. She looked like a gift waiting attractively to be unwrapped - in a good way. Deepika's makeup was on point with kohl-rimmed eyes and high ponytail. This is reportedly the first of Deepika Padukone's three appearances at Cannes this year and she is scheduled to walk the red carpet again on Friday and Saturday. Deepika, 33, is representing make-up giant L'Oreal at the film festival for the third year in a row. As always, Ranveer Singh complimented his wife on her gorgeous look. "BABY," wrote Ranveer, his overuse of exclamation reflecting his excitement.

Deepika Padukone landed in Cannes earlier in the day and revealed in a video she posted on Instagram that she didn't 'have much time' and would be going straight into hair and makeup once she got to her hotel. She flew into Nice airport dressed jeans and a white shirt finished with an oversized denim jacket and red heels. Here's a look at her post:

And no, Deepika Padukone didn't end up wearing red, after polling fans on whether she should. The verdict was that she should so perhaps one of next two looks will be.

Deepika has made it to best-dressed lists the last two years she's been at Cannes and has worn designers such as Prabal Gurung, Marchesa and Ashi Studio.

Deepika Padukone will be succeeded in the Cannes red carpet by fellow L'Oreal ambassadors Aishwarya Rai Bachchan and Sonam Kapoor. Kangana Ranaut also walked the red carpet on Thursday and TV star Hina Khan made her Cannes debut a day ago. Priyanka Chopra flew into Cannes earlier in the day and actresses Huma Qureshi and Diana Penty are also expected to put in appearances.