Kim Kardashian made a statement like never before in her black Balenciaga haute couture gown. 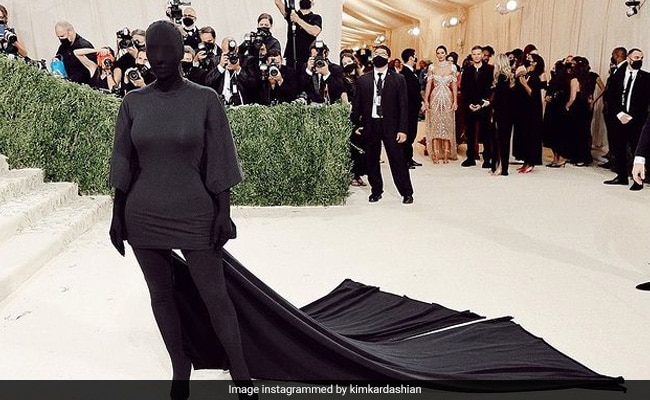 You can always trust Kim Kardashian to make a statement. And in true style, the model and entrepreneur left fashion lovers across the world with their mouths wide open with her appearance at the Met Gala 2021. Nearly 400 actors, poets, performers and athletes attended the Manhattan soiree on Monday and put their best foot forward to adhere to the theme, "In America: A Lexicon Of Fashion." But it was Kim Kardashian who captured people's imagination as she appeared in a black Balenciaga gown with a matching mask and train.

The mask covered her face, mouth, eyes and head. The only visible element was her hair, which was styled in a ponytail. Now, in a new Instagram post, the Keeping Up With Kardashians star has shared the reasoning behind her interpretation of the theme. Sharing a bunch of videos and images that trace her journey from the dressing room to the red carpet, Kim Kardashian said that the inspiration for her outfit was the T-shirt. Yes, you read that right. In the caption, she wrote, “What's more American than a T-shirt head to toe?”

While the first few images shared by Kim Kardashian feature her strutting the red carpet, we also get a glimpse of her being helped by an army of makeup artists and hairstylists to get into the outfit and wear the mask. We also catch her getting her makeup done before the big appearance.

This is, however, not the first time that the American socialite has embraced the all-black look. Kim Kardashian had earlier worn a similar bodysuit by the same brand to her estranged husband Kanye West's Donda event. A week ago, Kim Kardashian posed with her son Saint West in all-black ensembles and the Internet could not stop raving about the mother son-duo. On top of the list of admirers was Kim Kardashian's mother, Kris Jenner who left a bunch of black hearts in the comment section.

Kim Kardashian's Instagram timeline often gives us a candid take on her life and work. A few days ago, the reality TV star posted a throwback photo of herself partying with model Hailey Baldwin, singer Ariana Grande and sisters Kendall Jenner and Kylie Jenner. Sharing the snap, she wrote, “I officially miss going out.” And when she does step out, Kardashian sure knows how to get the world talking, much like her Met Gala appearance.

Kim Kardashian rose to fame with the reality series Keeping Up With The Kardashians. She has appeared in films such as Disaster Movie, Temptation: Confessions Of A Marriage Counselor and  Deep In The Valley, among others.