"If I say cheese will you give me a lollipop?" Mira Rajput captioned the post 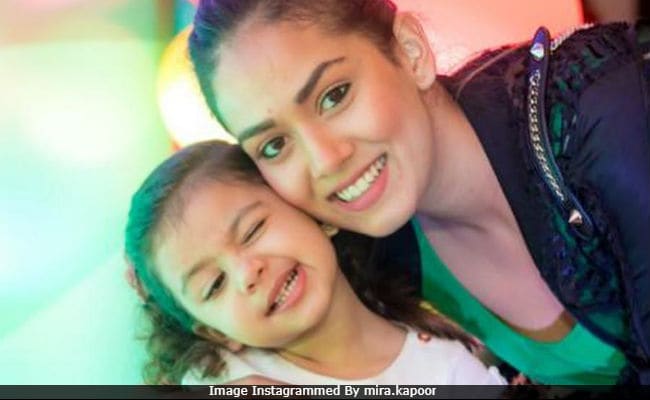 Mira Rajput delighted us with some fabulous pictures of herself with daughter Misha and with the post, she also sort of explained what she has to do to make the little one smile for the pictures. "If I say cheese will you give me a lollipop?" Mira captioned the post. The pictures appear to be taken at a party. Misha looks cute as a button in a white top and a colourful skirt and Mira is casually dressed in black. In one of the pictures, Mira can be seen adorably cuddling Misha. The post has got close to 2 lakh likes including that of stars like Kriti Sanon, Dia Mirza and Ishaan Khatter (Shahid Kapoor's brother) in just a couple of hours.

If I say cheese will you give me a lollipop

Shahid Kapoor and Mira Rajput married in July 2015. Misha was born in August 2016. The couple welcomed their second child, a son whom they've named Zain, in September 2018.

On New Year, Mira treated her Instafam to a picture of the entire family. "Grateful for the year that made us complete. Happy New Year," she wrote.

Meanwhile, Mira was recently trolled incessantly for colouring two-year-old Misha's hair. The post was uploaded on her Instagram stories and later, posted a clarification that it was just 'temporary.' At an event in Mumbai earlier this week, she told news agency IANS, "It wasn't a colour. It was a regular paint. She (Misha) just had nice time and I think it's just about letting your children to be creative, letting them be free and letting them to have a good time. I think it doesn't make sense to get serious about everything."

On the work front, Shahid Kapoor is currently busy with the Hindi remake of Arjun Reddy. His film with Kiara Advani is titled Kabir Singh.