Parineeti Chopra is currently in London 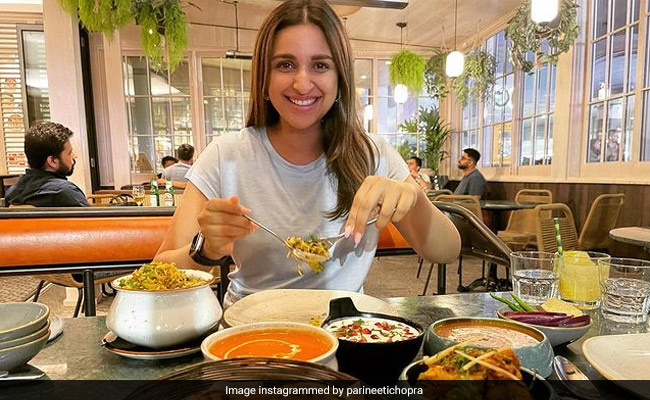 Actress Parineeti Chopra, who has been on a travel spree since the beginning of March, just had an emotional moment of sorts after she found Indian food in London. Before visiting London, Parineeti enjoyed a vacation in Turkey, which was followed by a trip to Austria. In her recent Instagram post, Parineeti poured her heart out and shared how much she misses "simple dal, roti and rice." She shared a bunch of pictures of herself from her outing to an Indian restaurant in London. While the first two pictures feature her smiling as she enjoys her meal, rest of the pictures capture the scrumptious spread that she enjoyed at the restaurant. We could spot paneer, pulao, dal and raita in the pictures.

In the caption of the post, Parineeti recalled how simple Indian food "brought tears" to her eyes. "I haven't been to India since March... and so a simple dal, roti and rice brought tears to my eyes last night," she wrote. Parineeti Chopra also thanked the restaurant for the delicious food. "Thank you, Copper Chimney, for making me feel like I was home... You realise the importance of anything when you're away from it," Parineeti wrote.

Parineeti's post prompted scores of comments from her Instafam. Among others, the 32-year-old actress' brother Shivang Chopra commented on the post. Shivang Chopra wrote: "Smiling looking at me?"

As mentioned above, Parineeti has been in London since last few weeks. She recently got her COVID-19 vaccine shot in London and spent the day with her cousin, actress Priyanka Chopra, who is also in London for the shoot of Citadel. Priyanka clicked several pictures of Parineeti after she got her vaccine shot. In one of the pictures, Parineeti can be seen resting on the couch with Priyanka Chopra's dog Diana.