What Do You Think Anil Kapoor Is Doing In This Pic - "Texting Or Flexing?" 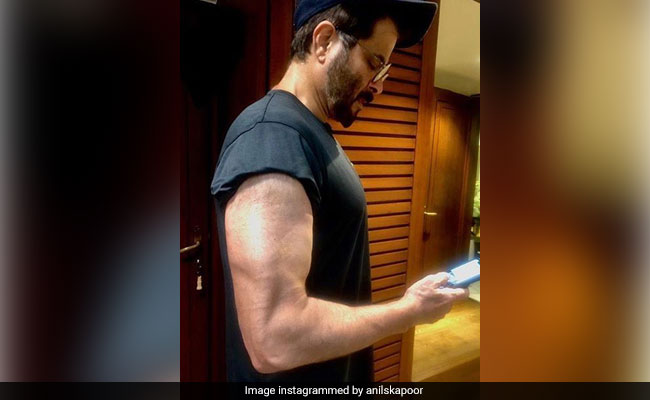 Anil Kapoor is 63 and perfectly defines the saying: "Age is just a number." Anil Kapoor, who maintains a strict fitness routine, often shares the results of his intense work-out sessions on his Instagram and Friday was one such day when he decided to send his Instafam into a tizzy. Anil Kapoor, also known for his jhakaas sense of humour, shared a photo of his bespectacled self from home, busy on his phone. Clearly, Anil Kapoor's pumped up biceps were the focus and referring to that, he posed this question to his followers: "Maybe I am texting or maybe I am flexing... any guesses?" LOL.

Maybe I am texting or maybe I am flexing...any guesses 😜

Anil Kapoor's post cracked up not only his Instagram followers but also his daughters Sonam and Rhea Kapoor, both of who reacted with the ROFL emojis. Anil Kapoor's neighbour and colleague Anupam Kher, who knows his friend a bit too well, shared another possibility: "You are looking at your own pic!"

Anil Kapoor's fitness regime will indeed make us look back. Here's how he usually drives away Monday blues:

In another post, the Malang actor shared the secrets of his fitness routine and said: ""It's not all about being locked in the dungeon of my gym, hitting reps after reps day after day. We must take time to let the body rest."

"You are your own motivation," said Anil Kapoor, with this post.

Earlier, Anil Kapoor was accused of "throwing biceps around" in this post by daughter Rhea: "Ugh! Parents. Always throwing their biceps in your face, am I right? Meanwhile, I am googling biryani recipes. And that, my friends, is what we call balance. #hes63 #proudofhim #stillgonnanaptho."

Ugh. Parents. Always throwing their biceps in your face, am I right? Meanwhile, I am googling biryani recipes. And that, my friends, is what we call balance. #hes63 #proudofhim #stillgonnanaptho