Wedding Rumours Aside, Farhan Akhtar Posts Pic With Shibani Dandekar That 'Says It All'

Farhan and Shibani are reportedly planning a wedding ceremony by the end of this year, sometime after Farhan's film Toofan releases 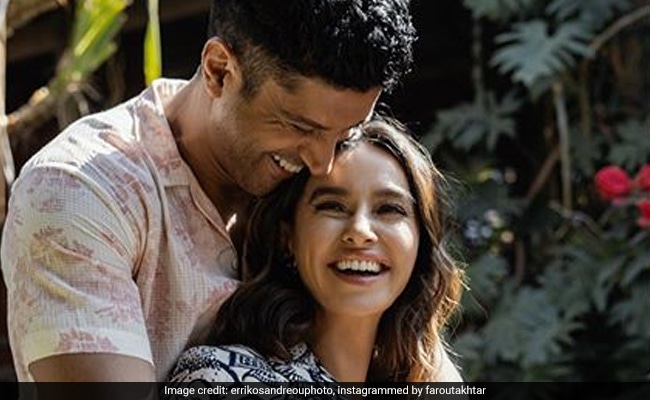 Farhan Akhtar and Shibani Dandekar have kind of taken a permanent spot in the trends list, courtesy wedding rumours. On Wednesday, Farhan sent the Internet into a tizzy with the caption to his new Instagram post. "When a picture says it all," he wrote for a loved-up photo of himself and girlfriend Shibani Dandekar. If the adorable photo of the couple appears familiar to you, that's because Shibani shared the same one on her feed on Farhan's birthday to post a lengthy note. Farhan and Shibani's intimate moment indeed "says it all" as they share a light moment and smile ear-to-ear in the photo.

Meanwhile, speaking to Times Of India in an interview, Farhan's father veteran lyricist Javed Akhtar neither denied nor confirmed the wedding reports. "I have just heard it from you. I was with Farhan on his birthday, which was the day before yesterday. He didn't tell me anything about this. But you never know, children can be very secretive," Javed Akhtar told TOI. About Shibani Dandekar, he said: "I have met her many times. She is a very sweet girl."

Farhan and Shibani are reportedly planning a wedding ceremony by the end of this year, sometime after Farhan's film Toofan releases. It's scheduled for October 2. A source close to the couple told Mumbai Mirror that Farhan and Shibani may get married before that: "But they might spring a surprise by tying the knot earlier than that. The final date is yet to be decided but Farhan and Shibani have begun preparations for the big day."

In March last year, Farhan Akhtar and Shibani Dandekar trended a great deal for posting a photo of their ring-adorned hands. The Internet concluded that Shibani and Farhan were engaged.