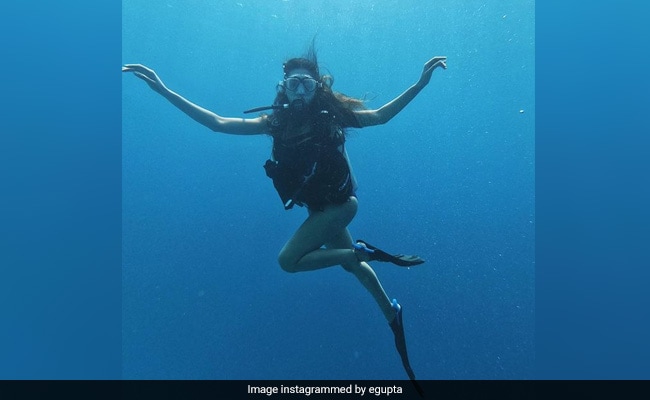 What good is a Maldives trip if it doesn't involve going into the blue, right? Well, the reason we brought this up today is because that is exactly what actress Esha Gupta did during her recent Maldives vacation. She shared postcard worthy pictures from her scuba diving session on her Instagram profile on Friday and they are just lovely. Esha, being all posey underwater, looks stunning in every frame. The actress captioned on the post, "Being Dory... Thank you Patrick." In the last picture from the set, she can be seen happily posing with her scuba instructor.

"Queen of the jungle," Esha Gupta wrote while sharing these pictures from her holiday, dressed to perfection. Isn't she? Without much ado, see the pictures here:

If only swimwear fashion done right had a face. Oh wait, it does - Esha Gupta it is. Check it out:

When the Jannat 2 actress is not busy holidaying at exotic locations, she likes to spend her time working out at the gym and her home. Esha, who has quite a bit of a reputation as a fitness enthusiast, loves to shares posts from her workout diaries.

Esha Gupta, a former model, made her Bollywood debut with the 2012 film Jannat 2, starring Emraan Hashmi in the lead role. She is best-known for starring in films such as Rustom, Commando 2, Total Dhamaal and Humshakals among others. The actress last featured in One Day: Justice Delivered. Her next project is the third rendition of the super popular comedy series Hera Pheri 3. Not much has been revealed about the project as of now.