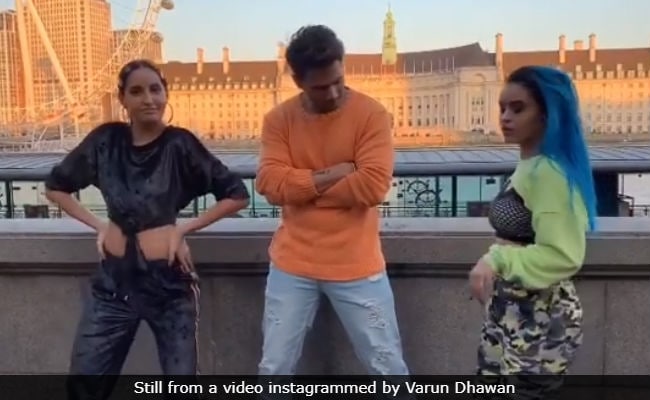 Varun Dhawan on the sets of Street Dancer in London. (Image courtesy: Instagram)

Varun Dhawan, who is currently making dance film Street Dancer in London, posted a video from the sets of the film, in which he competes with his co-stars Nora Fatehi and Sheetal Pery in twerk challenge. Who wins? Varun Dhawan, yes. "I often get challenged to twerk competitions on Street Dancer and I will do anything to win," he captioned the post. But did he win fair and square? Instagram users were bemused after watching Varun Dhawan's winning tactic. "Varun is lit," wrote an impressed fan while another added: "OMG, you're a legend."

Street Dancer, directed by Remo D'Souza, is touted to be India's biggest dance film and it will be made in 3D format. Street Dancer is Remo and Varun's second film with Shraddha Kapoor. The trio earlier collaborated on ABCD 2. Shraddha Kapoor had replaced Katrina Kaif in Street Dancer after the latter stepped out citing clash of dates with Bharat, which wrapped over the weekend.

Shraddha Kapoor is awaiting the release of Saaho and she's also signed up for Chhichhore and the biopic on Saina Nehwal.