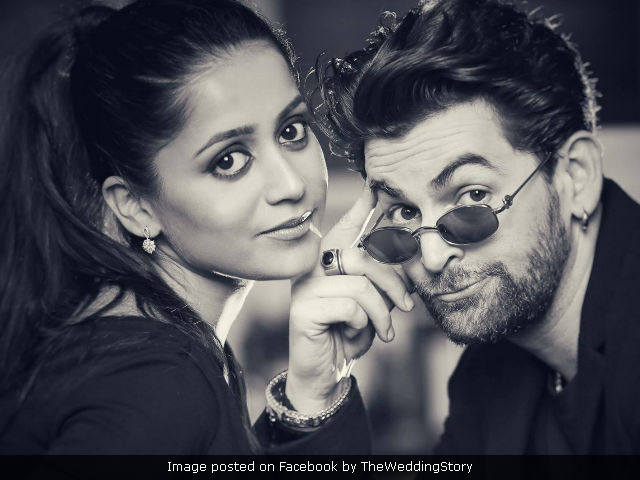 New Delhi: Actor Neil Nitin Mukesh and his fiancee Rukmini Sahay arrived in Udiapur for their wedding festivities which are scheduled from February 7-9. Neil and Rukmini got engaged on Dussehra last year and the couple will get married in a lavish ceremony in the presence of their family and friends in Udaipur. Fan clubs have shared the videos of their arrival to Udaipur's Raddison Blu hotel. In the video, Neil, 34, dressed in a bottle green blazer was seen around Rukmini, 27, who was wearing a bride-to-be sash. Neil's father Nitin Mukesh was also around the couple as dhol played in background. The guests seem to be enjoying themselves.

Here's the video of Neil and Rukmini's arrival in Udaipur:

There's another video being circulated on the Internet, which shows a very happy looking Neil Nitin Mukesh singing Kabira during one of the pre-wedding festivities. The video was originally shared by Priyansh Paliwal, with whom he's singing the song.

With the man himself last night. It was a pleasure to perform at the pre wedding gig of Mr. Neil Nitin Mukesh . Cant get over this, somebody pinch me The best selfie video ever of mine . Still have no words #Kabira #SelfieVideo #Selfie #RoyalWedding #PreWeddingGig #Udaipur #ArijitSingh #Rajasthan #Mumbai #NeilNitinMukesh #Proud #InstaVideo #PriyanshPaliwalLive #PriyanshPaliwal #IndianSingers #BestMusicShots #Memorable

In an interview to the Mumbai Mirror, the groom-to-be said that he will sing for his wife-to-be at the sangeet. "But I won't reveal what will I sing as I want to keep that a surprise for Rukmini," said Neil.

Promoted
Listen to the latest songs, only on JioSaavn.com
Neil and Rukmini's guest list reportedly has 500 guests comprising close friends and family, according to a new agency PTI report. The wedding functions will include the usual - mehendi, sangeet and wedding. The wedding will also be followed by a reception in Mumbai on February 17.

Neil Nitin Mukesh was last seen in 2016's Wazir and before that in Salman Khan's Prem Ratan Dhan Payo. He will be next seen in Madhur Bhandarkar's Indu Sarkar and Rohit Shetty's Golmaal 4.