The picture is trending big time on social media 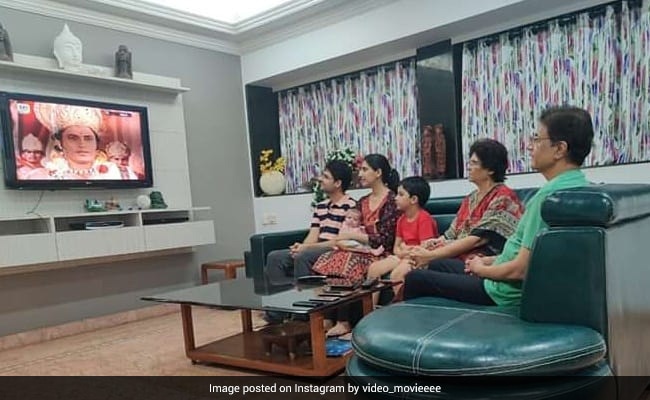 Actor Arun Govil, who famously starred as Lord Ram in Ramanand Sagar's Ramayan, occupied the top spot on Monday's list of trends after a photograph of him watching the popular TV series along with his family, went viral on social media. The picture, which was originally shared by a fan club on Instagram, is spreading like wild fire on social media. Ramayan, written, produced and directed by Ramanand Sagar, is being re-telecast on Doorsarshan. The show which also starred Deepika Chikhalia and Sunil Lahri as Sita and Lakshman, first aired on Doordarshan in 1987 and swiftly acquired cult status.

Last week, Information and Broadcasting Minister Prakash Javadekar announced that Ramayan will air on DD National twice a day starting March 28. "Happy to announce that on public demand, we are starting re-telecast of Ramayan from tomorrow, Saturday March 28 on DD National. One episode in morning 9 am to 10 am, another in the evening 9 pm to 10 pm," Mr Javadekar tweeted.

Happy to announce that on public demand, we are starting retelecast of 'Ramayana' from tomorrow, Saturday March 28 in DD National, One episode in morning 9 am to 10 am, another in the evening 9 pm to 10 pm.@narendramodi@PIBIndia@DDNational

Other than Ramayan, several other popular series such as Mahabharat, Byomkesh Bakshi and Circus, which starred Shah Rukh Khan, are being re-telecast on Doordarshan.