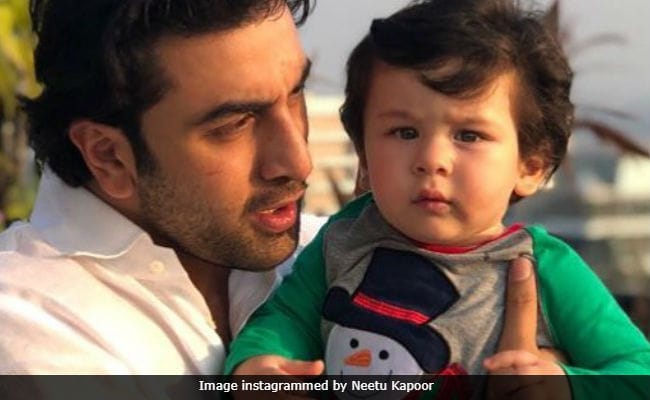 New Delhi: At the Kapoors' annual Christmas brunch, Kareena Kapoor and Saif Ali Khan's son Taimur stole the limelight. The family event revolved around Taimur, who was attending the annual gala for the first time - last year Taimur was only five-days-old and therefore, had to skip the do. This year, Taimur enjoyed with his aunts, uncles, grandparents and great-grandparents to the fullest. Videos and pictures from inside the event are all that the Internet can talk about. Especially, this picture of Taimur with his uncle Ranbir Kapoor, shared by Neetu Kapoor with the caption: "The 'Star' of the Christmas lunch."

The of the Christmas lunch

Here are a couple of videos of Taimur being coaxed by his family members to dance and smile and wear shades.

Here's another pic of Taimur with his mamas. We're curious to know what Ranbir is showing Taimur on his phone, which has the little nawab engrossed. "Trying to get Little T's attention but he's still dreaming of Santa,' Aadar Jain captioned the photo.

Trying to get Little T's attention but he's still dreaming of Santa!

Karisma Kapoor shared some other top moments from the do. First a picture of Kapoor cousins "with the cutie":

With the grand lady #greatgrandma#greatgrandkids#christmascheer#familylunch

Promoted
Listen to the latest songs, only on JioSaavn.com
Randhir Kapoor sat for a picture with Babita and his daughters Kareena and Karisma, his son-in-law Saif Ali Khan and grandchildren Kiaan, Sameira and Taimur.