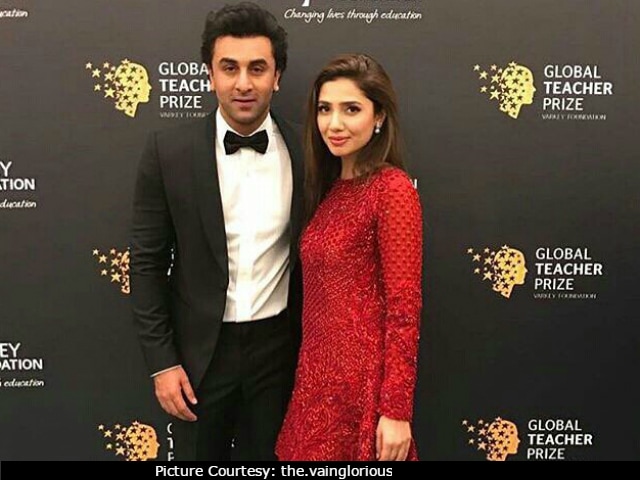 New Delhi: Ranbir Kapoor, who is currently busy shooting for Sanjay Dutt's biopic, managed to take some time off to attend an award show in Dubai, Global Teacher Prize. Ranbir had a gala time at the award function as he was not the only celebrity attending the show - Raees actress Mahira Khan was also there. Some videos of Ranbir and Mahira from the award function, which have been shared by the 34-year-old actor's fan clubs, went viral on the internet. In one of the videos, where the two are engaged in deep conversation, the 32-year-old Pakistani actress appears to be rather animated.

In another video, Ranbir and Mahira can be seen engaged in yet conversation, during which Mahira has her hands clasped together and appears to convey something important to Ranbir.

Ranbir (as always) looked handsome in a tuxedo designed by Armani while Mahira wore a red beaded peplum top paired wide pants from the shelves of Faraz Mannan.

Promoted
Listen to the latest songs, only on JioSaavn.com
Ahead of her Bollywood debut with Raees, Mahira Khan, who is best known for her Pakistani TV show Humsafar also featuring Fawad Khan, said that she considers Ranbir as a "brilliant" actor, reported Hindustan Times. The actress was quoted by Hindustan Times as saying: "Among the younger lot, I would say Ranbir Kapoor. He is a brilliant actor."

On the work front, Ranbir, who was last seen in Ae Dil Hai Mushkil, will next be seen in Anurag Basu's movie Jagga Jasoos, also featuring Katrina Kaif. The actor is also prepping for Sanjay Dutt's biopic directed by Rajkumar Hirani.