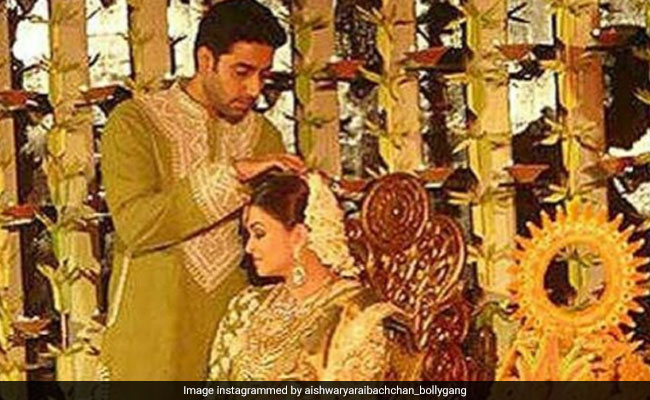 It is always a delight when we chance upon a throwback picture of Aishwarya Rai Bachchan and thanks to a fanpage dedicated to the 45-year-old actress, we got hold of several photos on Tuesday. Let us tell you that these are no ordinary pictures as the priceless throwbacks are from Aishwarya Rai Bachchan's dreamy baby shower. Yes, you heard it right. In the baby shower photos, Aishwarya looks beyond beautiful in a gold and olive green silk saree, which she perfectly pairs with gold jewelry and gajra in her hair. She can be seen sitting on a special chair with actor husband Abhishek Bachchan standing by her side, fixing her gajra. The other throwback photos also feature Aishwarya Rai's mom Vrinda Rai standing beside her daughter, holding an aarti thali. Aishwarya Rai Bachchan and Abhishek Bachchan welcomed their daughter Aaradhya in November 2011.

Last month, pictures from Abhishek Bachchan and Aishwarya Rai Bachchan's wedding sent the Internet in a tizzy and now the baby shower photos are going crazy viral on social media. Take a look:

In August, designer duo Abu Jani and Sandeep Khosla made a trip down the memory lane and fished out adorable pictures from Abhishek-Aishwarya's big fat wedding. In the photos from the wedding album, Amitabh Bachchan could be seen dancing his heart out with daughter Shweta Bachchan Nanda. Earlier, they posted priceless pictures from Aishwarya and Abhishek's sangeet ceremony, in which one of the power couples of Bollywood could be seen enjoying Amitabh and Jaya Bachchan's dance performance. Check it out:

2007: A groom so dapper, we continue to swoon even after all this time! Abhishek Bachchan was royalty personified on the day of his wedding with Aishwarya Rai. His Sherwani was a work of art realized in a fabulous geometric Vasli pattern. The inner kurta had self-tailoring and gota details with intricately embroidered Zardozi borders. His jooties too, featured indulgent embroidery and his safa was made of Jamdhani tissue that had dreamy gota details. Mothers often come to Abu Sandeep with a picture of this ensemble, wanting their sons to wear an identical Sherwani for their big day. @bachchan @aishwaryaraibachchan_arb #33YearsOfAJSK . . . #abujanisandeepkhosla #abujani #sandeepkhosla #journey #memories #milestones #highlights #anniversary #design #craftsmanship #original #couture #classic #handmade #handembroidery #fairytale #wedding #abhishekbachchan #aishwaryaraibachchan #jayabachchan #sherwani #geometric #vasli #gota #zardozi #borders #jamdanitissue

2007: A wedding beyond a fairy-tale! We are immensely thankful to Abhishek and Aishwarya for sharing these never before seen images from their Sangeet. Abu Sandeep not only designed the clothes, but they added their creative charm to the decor as well. The three months of joyous preparation for this event was a highly emotional and creatively satisfying time for the duo. It was a truly precious, personal and pleasant experience. In the picture above, Abhishek is matchlessly dapper in a blue silver brocade short Sherwani adorned with gota resham, stones and pearls, while Aishwarya exudes pure radiance in an embroidered pastel resham ghagra set that shone with sequins and stones along with a dupatta that was just as rich in details. Abhishek looks princely as ever and Aishwarya remains reminiscent of a goddess in all her bridal glory. The wedding was an epitome of glamour and grace and the memory of it remains fresh in our hearts. @bachchan @aishwaryaraibachchan_arb @amitabhbachchan #33YearsOfAJSK . . . #abujanisandeepkhosla #abujani #sandeepkhosla #journey #memories #milestones #highlights #anniversary #design #craftsmanship #original #couture #classic #handmade #handembroidery #fairytale #wedding #abhishekbachchan #aishwaryaraibachchan #brocade #resham #gota #sherwani #sequins #stones #ghaghra

Amitabh Bachchan married actress Jaya Bhaduri in the year 1973. Their son Abhishek Bachchan got married to actress Aishwarya Rai in 2007. Abhishek and Aishwarya have worked together in films such as Bunty Aur Babli, Guru, Raavan, Kuch Naa Kaho, Umrao Jaan and Sarkar Raj. They will next be seen together in Gulab Jamun.

'Don't Be Donkeys': Vidhu Vinod Chopra To Those Criticising Shikara, His Film On Kashmiri Pandits