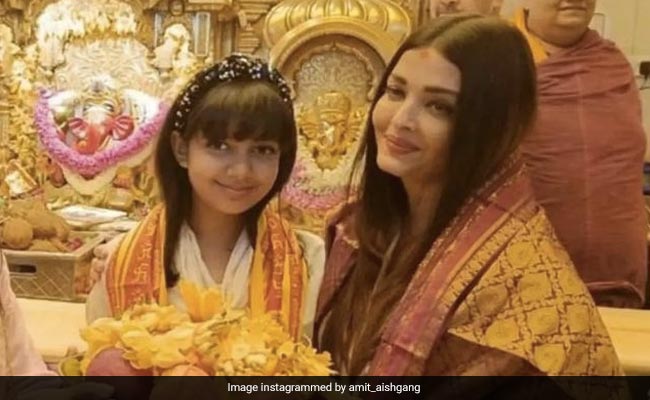 Aishwarya Rai Bachchan, who turned 49 today (November 1), visited the Siddhivinayak temple with her daughter Aaradhya Bachchan to seek blessings. Now, the images from the premises are going viral on the Internet. In the viral images, we can see the actress offering prayers at the temple. The mother-daughter duo is twinning in traditional white suit sets and poses for the camera with a puja thali in their hands. Aaradhya accessorised her look with a black and white headband. Soon after the pictures were posted, fans flooded the comment section. A fan wrote, "Wonderful," while others dropped heart and love-struck emoticons.

Aishwarya Rai and Abhishek Bachchan got married in April 2007 and welcomed their daughter Aaradhya on November 16, 2011.

Aishwarya Rai Bachchan was last seen in Mani Ratnam's magnum opus Ponniyin Selvan: I, co-starring Vikram, Trisha, Jayam Ravi, Karthi and others. The film, released on September 30, was based on Kalki Krishnamurthy's 1995 novel of the same name, chronicling the rise of the Chola dynasty. Next, she will be seen in the sequel of the film.