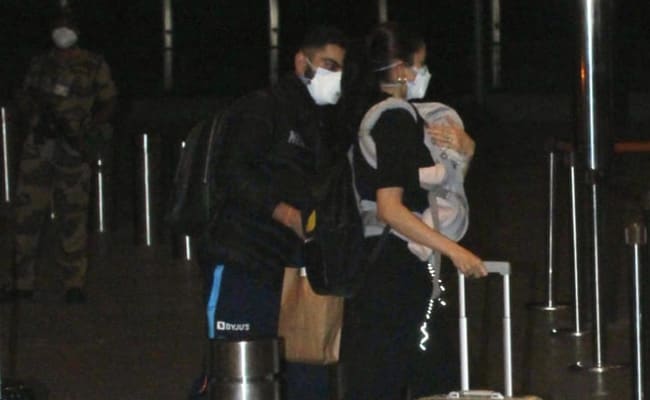 Anushka Sharma and Virat Kohli photographed at the airport.

Virat Kohli and the Indian cricket team left for the world test championship, to be held in the UK. He was accompanied by wife and actress  Anushka Sharma and their daughter Vamika. The star couple and members of the Indian cricket team were photographed at the Mumbai airport on Wednesday night. The couple were seen twinning in black outfits with their masks on. Flashbulbs popped at the stars as they made their way to the airport. Besides the men's team and their family, members of the Indian women's cricket team were also present at the airport, who will also be playing a Test match in the UK.

See the pictures of Anushka Sharma and Virat Kohli here:

Anushka at the airport.

A glimpse of Anushka Sharma with baby Vamika.

Virat Kohli and Anushka Sharma at the airport.

The star couple at the airport.

Ahead of the tour, all the cricketers spent 14 days in a bio-secure environment in India. Over the weekend, during quarantine, Virat Kohli interacted with his fans through an Ask Me Anything session on Instagram, where he was asked by a fan the meaning of the name Vamika and if they will get to see a glimpse of the star couple's baby daughter. Virat Kohli replied with these words: "Vamika is another name for Goddess Durga." He added, "We have decided as a couple to not expose our child to social media before she has an understanding of what social media is and can make her own choice."

Actor-producer Anushka Sharma and her cricketer husband Virat Kohli welcomed their first child, a baby girl on January 11 and they named her Vamika. The couple met during the shoot of a shampoo commercial and they got married in Tuscany, Italy in 2017.