Viral Pic From The Sets Of Akshay Kumar's Sooryavanshi, Shared By Katrina Kaif

Katrina Kaif and Akshay Kumar are reuniting in Sooryavanshi, a decade after they co-starred in 2010 film Tees Maar Khan. 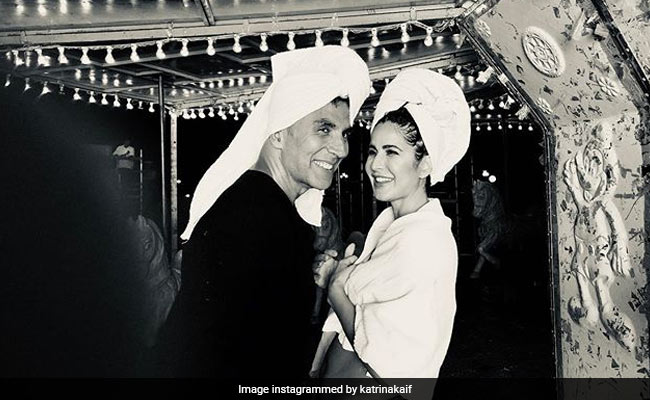 Katrina Kaif and Akshay Kumar on the sets of Sooryavanshi. (Image courtesy: katrinakaif)

Katrina Kaif is sharing updates from the sets of her upcoming film Sooryavanshi, which reunites her with actor Akshay Kumar a decade after they made Tees Maar Khan together. Recently, Katrina Kaif shared a picture from the sets of the Rohit Shetty-directed film, through which we got a glimpse of Akshay's uniform with his name tag - Veer Sooryavanshi. She captioned the now viral post, "Now Shooting #sooryavanshi #onset," and tagged Rohit Shetty, Akshay Kumar and the film's co-producer Karan Johar. Sooryavanshi is an upcoming cop drama, which is a part of Rohit Shetty's Singham universe. It is the third spin-off in Ajay Devgn-led Singham series after Ranveer Singh's 2018 blockbuster Simmba but more on that later.

Take a look at Katrina Kaif's post sharing a glimpse from the sets of Sooryavanshi:

Back to Rohit Shetty's cop-verse - Akshay Kumar's character Veer Sooryavanshi was introduced at the end of Simmba while Ajay Devgn made a special appearance as Bajirao Singham in the movie. As per media reports, both Ajay Devgn and Ranveer Singh will reprise the roles of Singham and Simmba, respectively for Akshay's Sooryavanshi.

In Sooryavanshi, Katrina Kaif is paired opposite Akshay while actress Neena Gupta has been roped in to play Akahsy's onscreen mother. Actor Gulshan Grover, who has faced the Khiladi actor in several films in the Nineties, has been cast as the principal antagonist.

Sooryavanshi also features Sikandar Kher, Nikitin Dheer, Vivan Bhatena and Niharica Raizada and it is expected to open in cinemas in the first half of 2020.