Viral: 'Once Upon A Time' Shriya Saran Danced In The Middle Of Ibiza 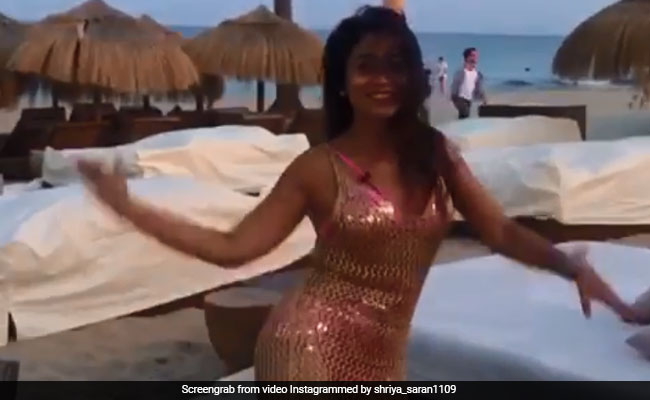 Shriya Saran in a still from the video. (Image courtesy: shriya_saran1109)

What's the best way to enjoy a holiday? Clicking postcard-worthy pictures? Sure. How about dancing in the middle of the island? We assure you that the idea won't sound that bizarre once you check out actress Shriya Saran's video, in which she can be seen dancing in the middle of Ibiza. The video has been spreading like wild fire on social media and we are not surprised at all. In the video, the Drishyam actress can be seen wearing a pink bikini and a golden fishnet dress and she can be seen making the most of her me time as her husband Andrei Koscheev records the video. Shriya shared the video with her 2.3 million followers on Instagram, of which over 1 lakh fans have liked the video already.

Shriya captioned the video: "Once upon a time in Ibiza. Will miss island life... Till next time. Check out the viral video here:

Once upon a time in Ibiza. Will miss island life .... till next time. @andreikoscheev

Shriya, who was in Spain a few days ago (going by her Instagram posts) has been actively sharing pictures from her vacation. The 36-year-old actress posted several fun-filled pictures from the Barcelona Cathedral and the caption on her post read, "Just like that."

Shriya Saran is best-known for her performances in Ajay Devgn's 2015 filmDrishyam. She made her Bollywood debut with the 2003 film Tujhe Meri Kasam and she has featured in Bollywood films like Ek: The Power of One, Shukriya: Till Death Do Us Apart, Awarapan and Mission Istanbul among others.

She has also starred in Tamil and Telugu films, including Sivaji: The Boss, starring Rajinikanth. She was last seen in the Telugu film Veera Bhoga Vasantha Rayalu. Shriya's forthcoming projects include Tamil films Naragasooran and Sandakkari and Bollywood film Tadka.