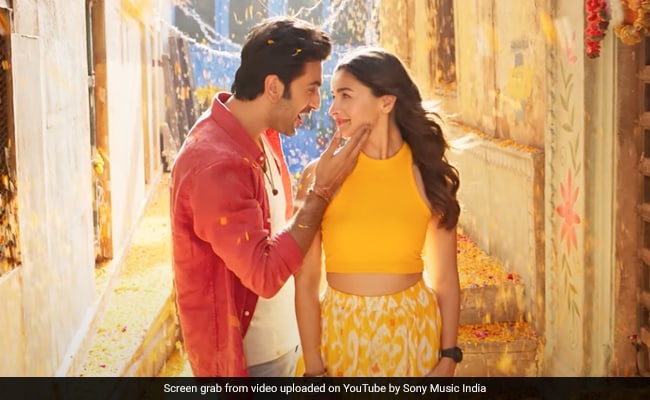 The first song from Ayan Mukerji's Brahmastra, titled Kesariya has been trending ever since it released on Sunday. The song, beautifully sung by Arijit Singh, has been picturised on Alia Bhatt and Ranbir Kapoor. The song, largely sung in Hindi, has two English words "Love Storiyan" in a line. Twitter users shared a couple of memes on how the two words seemed out of place in the otherwise flawless track. "Everything was going good in my life until I heard the word Love Storiyan in Kesariya song," wrote a Twitter user. Another Twitter user compared the bit to Arturo's character from the Netflix show Money Heist.

The Tamil and Telugu versions of the film have been sung by Sid Sriram.

First, check out the track here:

Just hopping on the trend#lovestoriya#Kesariya

if you don't love me then you don't
at my deserve me at my pic.twitter.com/j6haPnaZpV

The "love storiya" in Kesariya is like "Arturo" in Money Heist.. #Kesariya#LoveStoriya#MoneyHeist

How I feel when I hear the #LoveStoriya in #KesariyaTerapic.twitter.com/XvVAyLbof0

Another Twitter user wrote: "Everything was going good in my life untl I heard the word ' Love storiyan ' in kesariya tera song."

Brahmastra, Alia Bhatt and Ranbir Kapoor's first project together, is slated to release in September and it includes a stellar cast that also includes Nagarjuna, Dimple Kapadia and Mouni Roy. The film is slated to release in theatres on September 9. Alia Bhatt and Ranbir Kapoor found love on the sets of the film. They got married in April this year.