Amitabh Bachchan, who survived a near-fatal accident on Coolie sets, says in the video: "I don't know so many of you. Yet you prayed for me." 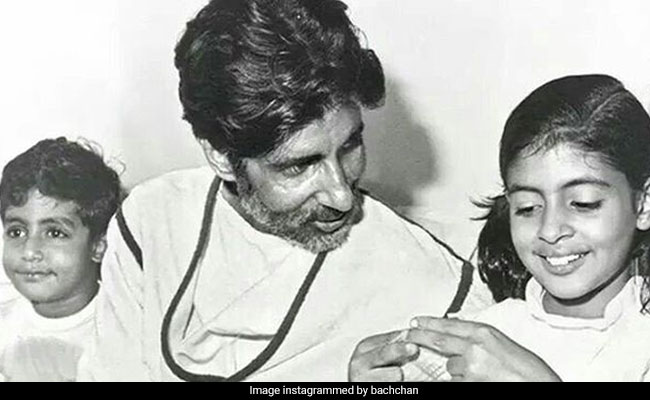 Amitabh Bachchan returned home on September 24 1982, two months after his near fatal-accident on the sets of Manmohan Desai's film Coolie and was greeted with an overwhelming welcome. Big B has written that day was the first time when he saw tears in his father's eyes. 37 years later, a video of Mr Bachchan's homecoming after two-months of treatment in the hospital, is crazy viral on the Internet. Courtesy for the video goes to a fan of Big B, who shared it on Twitter. In the video, a frail-looking Amitabh Bachchan can be seen stepping out of an ambassador and touching his father Harivansh Rai Bachchan's feet and pulling him in a tight hug.

Amitabh Bachchan, who required several more months to recover completely, released a brief video statement, in which he can be heard thanking his fans: "Today, the 24th of September, is exactly two months from the date when I was injured. And I sit here before you as a result of the efforts of the doctors from St. Philomena's Hospital. And more especially the doctors and nurses from the Breach Candy Hospital in Bombay. But I'm grateful most of all, to all you people, who have prayed for me, for my life. Be it in a temple, be it in a mosque, be it in a church. You all came forward."

"I don't know so many of you. Yet you prayed for me, I am grateful for that. The least that I can do now is to try and live up to your expectations. I'll try, I'll try very hard," Big B signs off with these words.

24 September 1982 Amitabh Bachchan return home from the hospital after the fatal accident on the set of Coolie & today after 37 years also 24 September 2019,Amit ji awarded with the #DadaSahebPhalkeAward
Love and respect
pic.twitter.com/tjIGQXzPk9

Amitabh Bachchan was shooting for Coolie in Bengaluru (then Bangalore) when he made a mistimed jump during an action sequence with co-star Puneet Issar. After missing the landing spot, he was brutally hurt by the edge of a table, had his spleen ruptured and was rushed to St. Philomena's Hospital in an unconscious state. Soon after he was flown to Mumbai and was admitted straight to Breach Candy Hospital. Fans across the nation prayed for Amitabh Bachchan's recovery as he remained in hospital in a critical condition and with no hope of survival. His actress-wife Jaya Bachchan, walked barefoot from Breach Candy to Siddhi Vinayak Temple every day to pray for his recovery.

The Bachchans celebrate August 2 as Amitabh Bachchan's second birthday, about which Big B once wrote on his blog: "The dark shadows that loomed large on August 2, 1982 at the Breach Candy Hospital, as I battled for life, having been under surgery for the second time within days, and not coming out of it for extended hours, Jaya being called in to the ICU to have a last glimpse of her husband, before I passed away and that last ditch effort by Dr Udwadia in pumping phial after phial of cortisone injections until miraculously, my toe moved and Jaya first noticed it and exclaimed 'Look, he's alive'."

#flashbackfriday 37 years ago in the Breach Candy hospital. My father was recovering from a near fatal accident on the sets of his film Coolie. Today- 2nd August we celebrate his second birthday as he was miraculously revived by the doctors on this day. Happy Birthday Pa! Love you. #TrueLegendsAreBornTwice

After his full recovery, Amitabh Bachchan joined the sets of Coolie, which turned out to be a box office blockbuster after its release on November 14 1983.