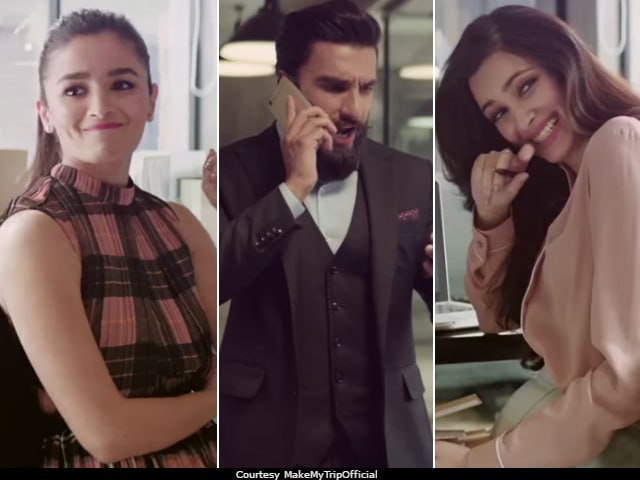 Ranveer, Alia, Diana in a still from the video (courtesy MakeMyTripOfficial)

New Delhi: There's always that prankster colleague of ours, ready to pull a trick on anyone. A new advert for travel portal Make My Trip has roped in their favourite, Alia Bhatt, to play the office prankster. The short and crisp video also stars Diana Penty and Ranveer Singh as Alia's co-workers. Alia decides to have some fun when Diana wonders where Sam (played by Ranveer) is from. You need a little context here. Sam appears to be the cool-guy, the handsome-hunk and the always-nicely-suited employee, who speaks with noticeably put-up accented English (of course). Diana and Alia, who share a cabin, also share the curiosity to discover the actual Sam.

Alia calls Sam to their cabin and as part of casual conversation, enquires if tickets for his Paris trip have been booked. She then simply opens the Make My Trip app on her phone, which features lucrative deals, and hands it over to Ranveer.

Diana raises an eyebrow but Alia assures that the job is done. What happens next will indeed make your roll on the floor laughing just like Alia and Diana in the advert. There's yet-another noticeable change in Ranveer's dialect but we'll stop at that. Smooth Alia, real smooth.

Promoted
Listen to the latest songs, only on JioSaavn.com
Ranveer and Alia have featured in a number of advertisements for the travel portal - we have seen Alia as a feisty Taxi driver while Ranveer played a Bangali babu, Alia also played a polite hotel receptionist in an ad, which featured Ranveer as a loud customer. Diana Penty is the new inclusion in the Ranveer and Alia series of Make My Trip videos, the new ones from which also cast Alia as sardar Ranveer's childhood friend Pinky.