Vidya Balan's Only Brief To Her Stylist - "Quite Simple" But Make It... 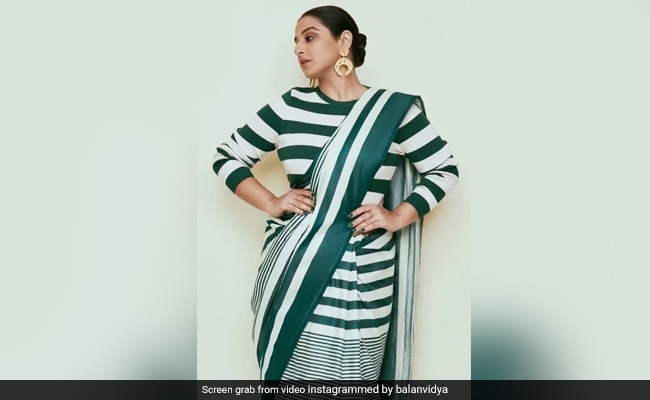 Vidya Balan in a still from the video. (courtesy: balanvidya)

Vidya Balan is one of the most celebrated actresses of her generation and for good reason. Movie after movie, the star has proved her talent as an actress. And, over the years, Vidya has managed to impress fans with her fashion game that revolves around her love of sarees. From traditional Kanjeevarams to designer creations, Vidya has embraced sarees on and off-screen, wearing them proudly in her films and on prestigious platforms such as the Cannes red carpet. Recently,  Vidya showed just how much she loves the Indian garment by revealing her "brief" to her stylists. Sharing a video of two of her saree looks in a post, the Paa actress said, “My brief to my stylists? Quite simple…Make it a saree. But make it stunning.”

A week ago, Vidya Balan even shared a fun Boomerang in which she is smiling for the camera while waiting for food. In the caption, she said, “When you are cold, tired and waiting for your food.”

In another post, Vidya Balan is resting on a bench in London, clad in a dress with a hoodie. In the caption, she said, “London.”

Recently, Vidya Balan also had her Instafam chuckling when she channelled her inner Alexis Rose from Schitt's Creek in a video. In the clip, she is mouthing one of Alexis' most famous dialogues, “Ew, David.” And the dialogue was matched with the caption, “When someone says they enjoy green tea more than desi chai.”

Vidya Balan once even shared a video of her heading to work on a Saturday. Dressed in a T-shirt and pants, the star looks lovely as always. In the caption, she wrote, “Working Saturday,” to which actor Pratik Gandhi said, “Working even on Sunday.” Pratik and Vidya will be seen in an upcoming film alongside Ileana D'Cruz.

Vidya Balan was last seen in the film Jalsa alongside Shefali Shah. She will soon be seen in Neeyat and another untitled film directed by Shirsha Guha Thakurta.