"Very Tough Hour For Me And My Family," Tweets Akshay Kumar On His Mother's Health

"Every single prayer of yours would greatly help," tweeted Akshay Kumar 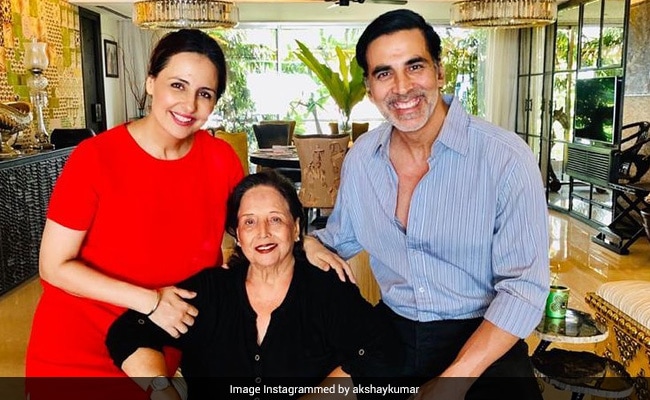 Akshay Kumar with his sister and mom. (courtesy: akshaykumar)

A day after Akshay Kumar returned from the UK because of his mother's deteriorating health condition, the actor tweeted an update on her health on Tuesday evening and he wrote that it is a "very tough" time for his family and him. He thanked his fans and well-wishers for their concern and wrote in his tweet: "Touched beyond words at your concern for my mom's health. This is a very tough hour for me and my family. Every single prayer of yours would greatly help." The actor's mother Aruna Bhatia is currently in the ICU at Mumbai's Hiranandani Hospital.

Touched beyond words at your concern for my mom's health. This is a very tough hour for me and my family. Every single prayer of yours would greatly help.

On Monday, a source told Hindustan Times, "The actor's mom has been unwell for a few days and is in the ICU at Mumbai's Hiranandani Hospital. Akshay is extremely attached to his mother and could not stay away from her while she's not well, so he decided to fly back to India in a sudden decision. Even as he has flown back to be with mom, he has told his producers to carry on shooting with scenes that do not require his presence. All other work commitments of his also continue."

On the work front, Akshay Kumar has a super busy schedule in 2021. Earlier, the actor shot for Atrangi Re with Sara Ali Khan and Dhanush. He will soon star in Bachchan Pandey. He will also feature in Prithviraj, which is a biopic of Prithviraj Chauhan. Sooryavanshi, which is Akshay Kumar's foray into Rohit Shetty's cop universe, is expected to release in theatres this year. The actor announced two new projects last year - Raksha Bandhan and Ram Setu.

The actor was last seen in the espionage thriller Bell Bottom with Lara Dutta, Huma Qureshi and Vaani Kapoor. It had a theatrical release last month.