In the song, Kareena, Sonam Kapoor, Swara Bhasker and Shikha Talsania recall how they supported each other through and through 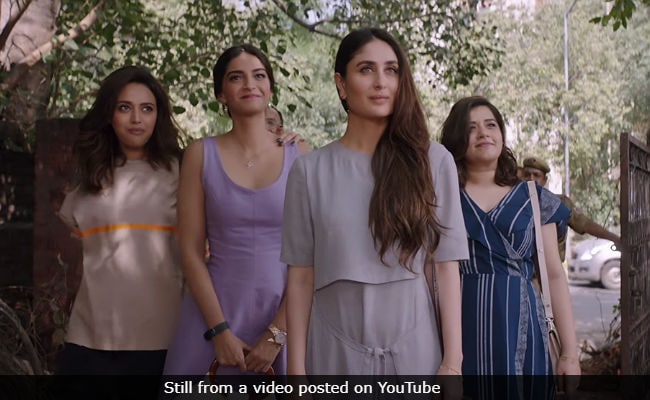 New Delhi: When life gives you trouble summon your veeres for a' pick me up' - that's the lesson of new Veere Di Wedding song Aa Jao Na. After Kalindi (Kareena Kapoor) calls off her wedding she looks up at her three best friends for support, who are right there beside her. Aa Jao Na is featured on the four female protagonists of Shashanka Ghosh's film but the song is in the voices of Arijit Singh and Shashwat Sachdev. In the song, Kareena, Sonam Kapoor, Swara Bhasker and Shikha Talsania reminisce the happy moments they claimed as their own and how they supported each other through and through:

Veere Di Wedding is produced by Sonam's sister Rhea Kapoor. The trailer of the film releases earlier this month and it was promised a grand tale of a grandiose friendship. The four protagonists, at a certain age, are struggling with problems and while solving each other's issues they break one stereotype at a time.


Promoted
Listen to the latest songs, only on JioSaavn.com
Veere Di Wedding is Kareena's first film after giving birth to her son Taimur and for Sonam's it is her first movie after her wedding . Sonam married businessman Anand Ahuja earlier in May.

Veere Di Wedding also stars Neena Gupta and Sumeet Vyas. The film will open in theatres on June 1 when it will clash at the box office with Bhavesh Joshi Superhero, starring Sonam and Rhea's brother Harshvardhan Kapoor.