"That's it! I am arranging play dates with my cats and him," Jacqueline Fernandez commented on Varun Dhawan's post 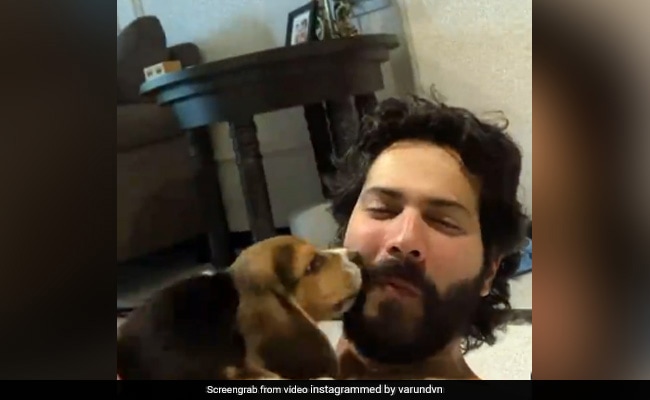 Varun Dhawan and his dog in a still from the video.(Image courtesy: varundvn)

Varun Dhawan has stepped into a new phase of his life, and it is all about "fatherhood." The 34-year-old actor recently welcomed an adorable beagle puppy into his family. How we know this? Courtesy, Varun Dhawan's recent Instagram post. The actor dropped a new video introducing his puppy to his Instafam. Looks like the dog is already a fan of his pet parent as it can be seen jumping and licking Varun's face in the video. In the caption of his post, Varun asked his Instafam to suggest names for his puppy. "FATHERHOOD. Still haven't been able to name my boy. Help me out," he wrote in the caption of the post.

The actor's post received scores of comments from his fans as well as fellow celebrities. While Sonakshi Sinha asked about the dog's name in the comments section, Tiger Shroff wrote: "Sooo cute." Jacqueline Fernandez, on the other hand, is already planning "play dates" for her cats and Varun's dog. "That's it! I am arranging play dates with my cats and him," Jacqueline Fernandez wrote in her comment.

Last week, Varun Dhawan was pictured enjoying Mumbai rains at his residence. He shared two pictures of himself on Instagram. In the pictures, he can be seen standing on his balcony and enjoying the most out of the rainy weather.

In terms of work, Varun Dhawan was last seen in comedy-drama Coolie No. 1, co-starring Sara Ali Khan. He will next be seen in horror-comedy Bhediya, co-starring Kriti Sanon. He will also star in Raj Mehta's Jugg Jugg Jeeyo.