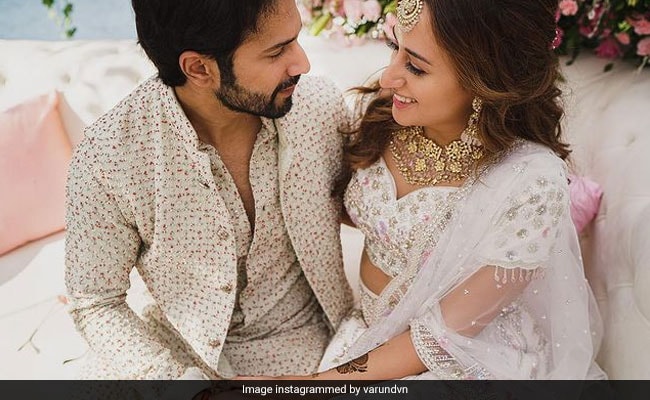 Varun Dhawan and Natasha Dalal, who had a no-phone policy at their wedding, are making up by sharing stunning pictures from their wedding festivities - one post at a time. On Monday, the newlywed actor first posted a picture from his haldi ceremony. Later in the day, Varun shared picture perfect moments from his and Natasha Dalal's mehndi ceremony. Just like their wedding, their mehndi outfits were also pristine white. Natasha's pick was a white lehenga, while Varun complemented her in a matching kurta-pajama set with a jacket over it. Pictures from the couple's mehndi ceremony are all things pretty. Varun's Instafam filled up the comments section of the post with heart emojis. No caption needed.

Earlier on Monday, Varun Dhawan posted a bunch of happy pictures from his Haldi ceremony on his Instagram profile. The actor simply captioned the post: "Haldi done right." This is the picture we are talking about:

Varun Dhawan married his longtime girlfriend Natasha Dalal at Alibaug's The Mansion House on Sunday evening. The couple's wedding ceremonies were a close-knit affair with a no-phones policy and with a few guests in attendance. Some of the stars to attend the wedding were Karan Johar, Kunal Kohli, Shashank Khaitan and designer Manish Malhotra. After his wedding, Varun Dhawan shared a post for his wife Natasha Dalal and he wrote: "Lifelong love just became official."

Varun Dhawan, who stepped into the Indian entertainment industry as an assistant director to Karan Johar, made his Bollywood debut with the director's Student Of The Year in 2012, alongside Alia Bhatt and Sidharth Malhotra. He was last seen in David Dhawan's Coolie No 1 remake, opposite Sara Ali Khan.