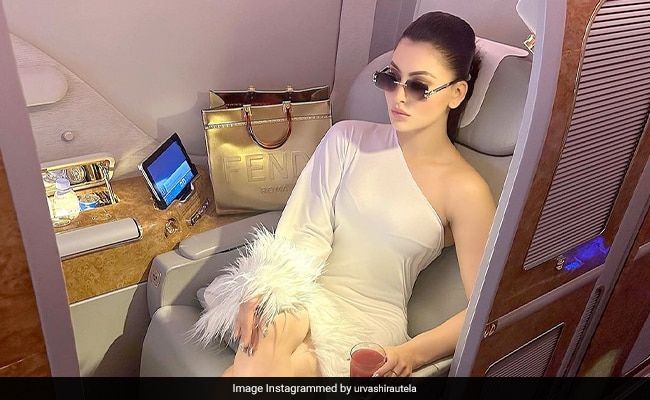 Please don't disturb, Urvashi Rautela. She has jetted off to Paris for Fashion Week. How do we know? The actress has announced it on Instagram with a series of pictures. All we can say is that the album screams luxury from miles away. In the opening slide, Urvashi, in a stunning white off-shoulder dress, gives us a glimpse of her glam-up avatar for her trip to Paris. It seems that the pic was clicked inside the lounge area at an airport. The next two slides are from her time on the flight. She is seen enjoying every bit of the amazing business class experience. Hope you didn't miss the designer handbag by FENDI. Urvashi looks comfortable as she enjoys a glass of juice inside the aircraft. Oh, and, those shades and shimmery manicure have added an extra edge to the overall outing. Along with the photos, Urvashi wrote, “Paris Fashion Week”. She has also added a white heart emoji to the post. The hashtags read, “#love, #UrvashiRautela, #UR1, #ParisFashionWee, #PFW”. Fans have dropped fire and red heart emojis in the comments section. Take a look:

Urvashi Rautela has also dropped a video from her poolside photo shoot. The actress is a sight for sore eyes in the white bodycon dress. She didn't think much about the caption and just picked a white heart emoji.

Urvashi Rautela was last seen in Waltair Veerayya, directed by  KS Ravindra. The film stars veteran actor Chiranjeevi in the lead role. Shruti Haasan, Ravi Teja and Catherine Tresa are also part of the film. Waltair Veerayya was released on January 13. The film has received much love from fans and critics alike. To express her gratitude for all the love coming her way, Urvashi dropped some pictures featuring herself and Chiranjeevi. The two are sharing a candid moment here. Sharing the album on Instagram, Urvashi wrote, “Megastar  Chiranjeevi, #Blessed Waltair Veerayya wins big Pongal-Sankranti Festival Season.”

You can listen to the song here:

Urvashi Rautela made her Bollywood debut with Singh Saab The Great in 2013.