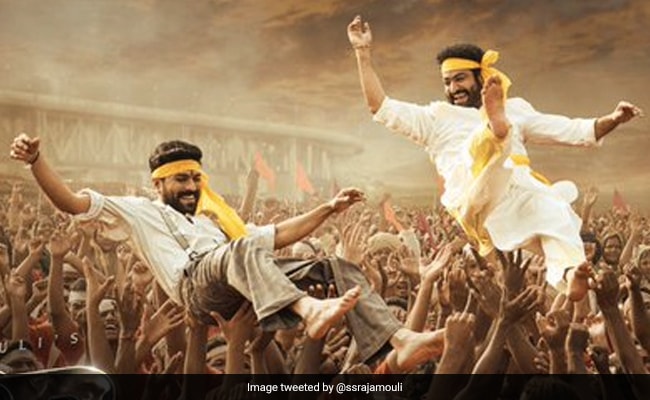 On Ugadi, which marks the New Year's Day in the states of Karnataka, Telengana and Andhra Pradesh, filmmaker SS Rajamouli has a special gift. He tweeted a brand new poster of his upcoming period piece RRR. The new RRR poster, starring actors Jr NTR and Ram Charan, gives off major festive vibes. Jr NTR and Ram Charan's post will instantly put you in a celebratory mood. SS Rajamouli is making RRR based on the fictional story of two revolutionaries from pre-independence era, set in 1920. Ram Charan has been cast as revolutionary Alluri Sitarama Raju while Jr NTR features as revolutionary tribal leader Komaram Bheem.

Here's how Ram Charan, Jr NTR and SS Rajamouli wished you on Ugadi. The Telugu and Kannada New Year Ugadi coincides with Gudi Padwa, which is celebrated as the New Year's Day in Maharashtra.

Happy Ugadi to you all..:)#ఉగాది#ಯುಗಾದಿ#GudiPadwa#नवसंवत्सर#தமிழ்ப்புத்தாண்டு#വിഷു#ਵੈਸਾਖੀ#RRRMovie@tarak9999@AlwaysRamCharan@ajaydevgn@aliaa08@RRRMovie@DVVMovies@PenMovies@LycaProductionspic.twitter.com/cnAqZi1DXe

RRR is special on various levels - other than casting the two superstars together, this film also stars Bollywood actors Alia Bhatt and Ajay Devgn. Alia Bhatt has been roped in to play the role of Sita, Ram Charan's love interest while Jr NTR's Komaram Bheem will fall in love with Jennifer, a chraacter played by actress Olivia Morris. Ajay Devgn will reportedly play onscreen mentor to Ram Charan and Jr NTR's characters.

After months of lockdown, Baahubali director Rajamouli resumed the shooting schedule of RRR in November last year. The film was initially supposed to hit screens in January this year but was postponed because of the pandemic. RRR is all set to hit screens on October 13, 2021.