Twinkle Khanna's "Biased Opinion" About Dimple Kapadia In Tandav: "So Bloody Good At What She Does"

"I am too proud of her and after sharing these on our family chat, I am sharing it with the whole world," Twinkle Khanna wrote while sharing positive reviews of Tandav. 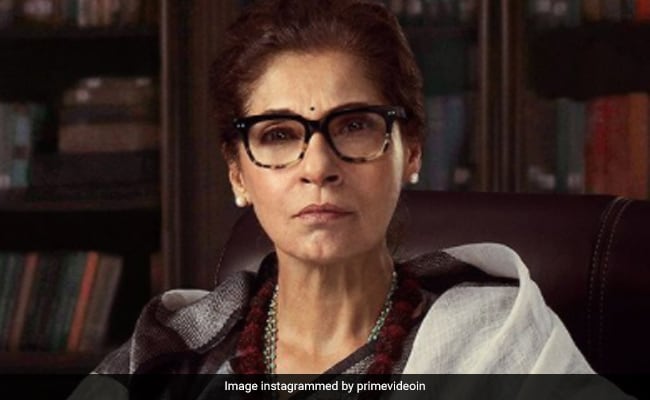 Dimple Kapadia in a still from Tandav (courtesy primevideoin)

Twinkle Khanna, a former actress, is mom Dimple Kapadia's loudest cheerleader. On Friday, the web-series Tandav, starring Dimple Kapadia and Saif Ali Khan in lead roles, released on Prime Video and Twinkle Khanna couldn't be more proud. She's constantly been cheering for her mother with subsequent social media posts, the first of which read: "Mother is on a roll and is so bloody good at what she does." In the NDTV review of Tandav, Dimple Kapadia's performance has been singled out as: "...He (Saif Ali Khan) is upstaged for the most part by Dimple Kapadia in the guise of a super-ambitious woman." Sharing it on Twitter, Twinkle wrote: "My mama is the best! So bloody proud of her."

However, Twinkle made a confession in another Instagram post about being "biased" towards Dimple Kapadia while also praising the performances of Saif Ali Khan, Zeeshan Ayyub, Sunil Grover and Kumud Mishra in the series: "I am too proud of her and after sharing these on our family chat, I am sharing it with the whole world. PS - Saif is in fine form and so are Mohd. Zeeshan Ayyub, Sunil Grover and Kumud Mishra to name just a few of the fine actors in Tandav. But mama bear is still the best and that is my biased opinion. We understand, Twinkle.

Twinkle Khanna was equally enthusiastic when Christopher Nolan's Hollywood film Tenet, starring Dimple Kapadia in a key role, released last year. "Finally saw Tenet in the theatre and though my mother is so laid-back that she refuses to do any publicity around it, she has a wonderful part and is completely incredible," she had tweeted.

Twinkle Khanna, a former actress, switched careers to become a best-selling author of these books: Pyjamas Are Forgiving, The Legend Of Lakshmi Prasad and Mrs Funnybones. She currently sports many hats - she's a columnist, an interior designer, a producer and also a Twitter humourist.

"Faced Prejudice And Still Do": Tandav Actress Kritika Kamra On Her Transition From TV To Bollywood