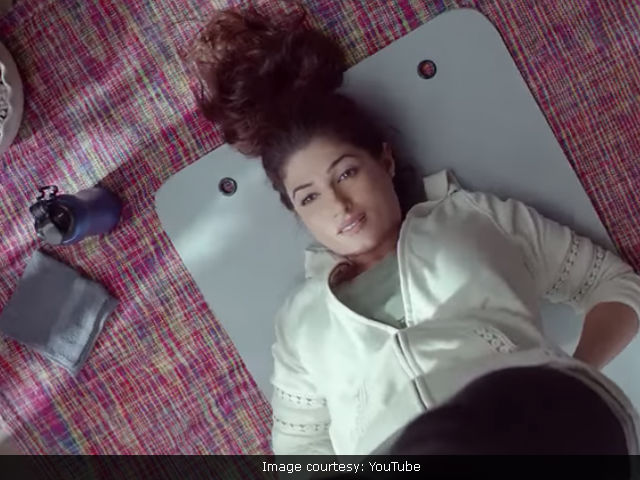 Twinkle Khanna in a still from the advertisement (courtesy: YouTube)

New Delhi: Author Twinkle Khanna never fails to delight her fans and followers with hilarity-overloaded tweets. Twitterati had one such experience on Wednesday evening. It has also been made apparent by now that Twinkle loves to take digs at herself, which has been proved with her new tweet yet-again. Twinkle has recently featured in an advert for Google Pixel and shared a recorded version the video, in which she can be seen doing yoga and compared herself to Baba Ramdev. And in doing so, she used hilarious phrases as adjectives to draw her comparison with the yoga guru. "The chronicles of the middle-aged model - hanging around the set as a slightly stiffer and significantly plumper Baba Ramdev," Ms Khanna wrote on Twitter.

This is what Ms Khanna posted on Tuesday:

The chronicles of the middle-aged model- hanging around the set as a slightly stiffer and significantly plumper Baba Ramdev #DayWithPixelpic.twitter.com/YWYA29Hbwk

Earlier, Ms Khanna and her best friend Karan Johar had an interesting Twitter conversation, which originated from the actress-turned-author's new ad. Twinkle asked for a role in a Karan Johar-movie which was smartly replied with these words by Mr Johar: "Darling you rejected my first offer ever! Now I am hurt forever." For the uninitiated, Twinkle Khanna was originally offered the role of Tina which Rani Mukerji played in Karan Johar's first film, Kuch Kuch Hota Hai. However, here's how Ms Khanna appeared to make a request: "Since you are so impressed can I suggest a sequel to My Name Is Khan - add 2 alphabets, call it My Name Is Khanna and cast me."

Promoted
Listen to the latest songs, only on JioSaavn.com
Earlier in 2015, Twinkle Khanna had also made a reference to Baba Ramdev with this tweet:

Baba Ramdev you have some tough competition coming your way as Baby Nitara learns all the moves #YogaFilledLifepic.twitter.com/N5iLqlMsHH

Twinkle Khanna, 43, is the author of two books and owns the production house Mrs FunnyBones, which is also her Twitter moniker and the name of her first book. She will soon be producing new film Padman, starring her husband Akshay Kumar, Sonam Kapoor and Radhika Apte.