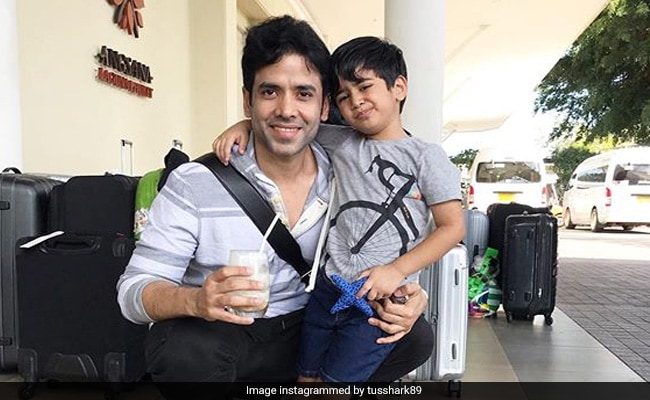 Due to the Coronavirus outbreak, Maharashtra is on a partial lockdown with schools, colleges and other public spaces like gyms, cinemas and swimming pools closed. Meanhwile, actor Tusshar Kapoor is making the most out of his time at home with his son Laksshya. The Golmaal 3 actor shared a video with the netizens on his social media account. It featured him and Laksshya having fun while "home schooling" as the little munchkin can be seen rocking on his father's shoulders. Tusshar Kapoor, in his caption, said "The perils of trying to home school, while in lockdown!" The 43-year-old actor added the hashtag "Wednesday" to his caption. Here's the video we're talking about:

The perils of trying to home school, while in lockdown! #wednesday

On Tuesday, Tusshar Kapoor shared a picture of his father Jeetendra holding Laksshya and wrote, "The Ides of March are upon us! It's important to be quarantined outside too!" He accompanied it with the hashtag "Bonds."

The Ides of March are upon us! It's important to be quarantined outside too! #bonds

Tusshar Kapoor is a single parent to his 3-year-old son. Laksshya was born via surrogacy in the year 2016. The little one, who often features on his father's social media handle, was last seen in a photograph featuring the father-son duo reading a bedtime story.

Reading a bedtime story to my son about sustainability & environmental protection is my way of making a small change for our planet! Let's Celebrate Earth Day, Every Day! Make conscious efforts to bring small changes that can make a big difference. What are YOU doing to save our earth? I challenge @ektarkapoor @neelamkotharisoni @chainanisunil @aftabshivdasani @meenaiyerofficial & @renudc to make a difference. Tag your 5 friends and challenge them to make a difference, too! @duniya_2020! #earthday #challenge #nature #environment #climate #plastic #clothBags #duniya2020

Talking about the Coronavirus outbreak, which has pushed people to stay indoors, has claimed many lives worldwide. Maharashtra has reported highest number of cases of the novel Coronavirus. On Tuesday, a woman died in the state taking the total number of deaths due to the virus to 3 across the country.