Tusshar Kapoor dedicated a post to all "single parents" out there 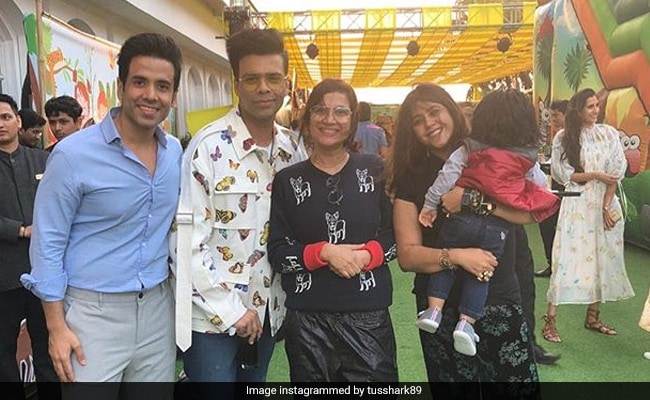 Tusshar Kapoor gave a massive shout-out to what he called the "single parents' club" with a post on Instagram. Tusshar, also a member of the "single parents' club" dedicated the post to his sister Ekta Kapoor and filmmaker Karan Johar. "Single parents Club... we broke barriers," he captioned a photo from Karan Johar's twins Roohi and Yash's birthday party at Taj Land Ends in Mumbai. Tusshar Kapoor's son Laksshya was born via surrogacy in 2016 while Ekta Kapoor also opted for surrogacy and welcomed son Ravie in January last year. Meanwhile, Karan Johar became a single parent when Roohi and Yash were born via surrogacy in February 2017.

Meanwhile on Ekta Kapoor's timeline, there arrived this adorable video of Tusshar and Riteish Deshmukh trying to keep little Ravie entertained while he devotes all his attention to Neelam Kothari. Ekta shared this ROFL caption: "Trying to distract Ravioli... the 'kool' mamas ....but Neenu Aunty had his attention."

Trying to distract ravioli ...the ' kool' mama 's ....but neenu aunty had his attention

In an interview with IANS earlier, Tusshar Kapoor had revealed he decided to become a single parent to channel his paternal instincts: "At around 35, 37, I started getting paternal instincts for my pets. I also began to wonder then how would it feel like to hold your child? I wanted to be a father and I wanted to start a family, so I did it. People then messaged me that I am inspiring them."