How cute is this picture of Laksshya! 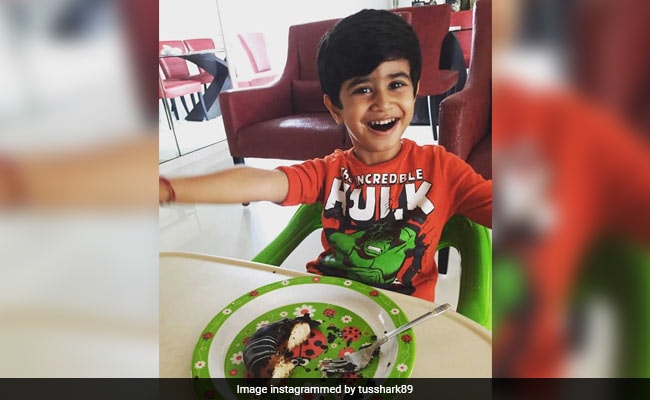 What's the best way to deal with life when it throws lemons at you? "Pick a doughnut," perhaps. At least that's what Tusshar Kapoor says he does. The actor made our Friday slightly better by sharing a picture of his 3-year-old son Laksshya on his Instagram profile. Tusshar posted a super cute picture of Laksshya, in which he could be seen eating a doughnut and the smile on his face says it all. Tusshar captioned the post: "Friyay! Keep the child in you alive.... Pick a doughnut when life throws lemons!" The Internet loved Laksshya's smile and left comments like "so sweet" and "lovely boy."

Laksshya frequently makes appearances on is father's Instagram profile and we simply love it when that happens. Here are some of our favourite pictures of the father-son duo:

Laksshya not only features on his father's Instagram profile, his aunt Ekta Kapoor also delights her Instafam with pictures of herself along with her nephew. This is what we are talking about:

First Mother's Day as a mother naaaaah that was three years ago! #motheroftwo

Laksshya Kapoor was born to Tusshar Kapoor via IVF on June 1, 2016. Laksshya is often spotted accompanying his father and aunt on outdoor shoots. He goes to play school and is frequently spotted with plays dates with Kareena Kapoor and Saif Ali Khan's son Taimur and Karan Johar's children- Roohi and Yash.

On the work front, Tusshar Kapoor recently made his digital debut with the web series Booo... Sabki Phategi, which has been produced by his sister Ekta Kapoor.