I Used To Fight A Lot With Ekta But We're Mature Now: Tusshar Kapoor

"She is a very intelligent producer and very passionate about her work," said Tusshar Kapoor 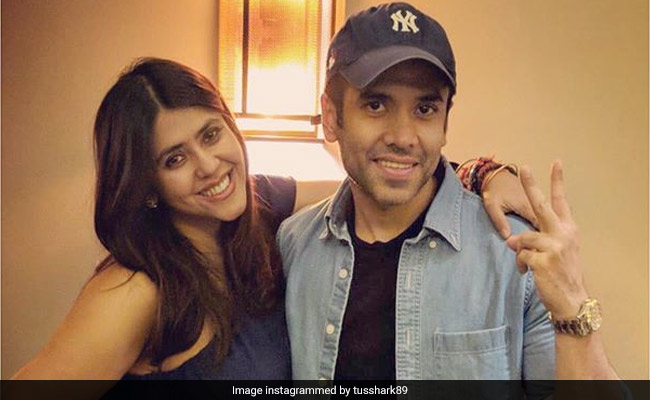 Bollywood actor Tusshar Kapoor, who has made his digital debut with the web series Booo...Sabki Phategi -- produced by his sister Ekta Kapoor -- says that as children they used to fight a lot, but now they are more like friends.

This isn't the first time they have worked together.

Asked how their personal bond translates professionally, Tusshar told IANS: "As a kid, I used to fight a lot with Ekta. Since our age difference is not that much, we would fight on everything... whether it is games, watching TV and all the small things siblings fight on. We used to share the same room."

"But I think after we started working, and with time, we both are mature now. She is a very intelligent producer and very passionate about her work."

Has he entered the digital entertainment space to stay relevant with time as shows on the web platform are grabbing a lot of eyeballs?

"No, it is nothing like that," said the actor, and added: "Apart from cinema, I did not do anything else like TV shows because that is much more time-consuming. TV is always a bigger commitment. But for a web series, we shoot it like a film and then once it is released, it will stay there for posterity.

"Since the show is also a mad, fun, horror comedy, it was an entertaining story to shoot. So I came on board."

Talking about working with Mallika, Tusshar said: "She is a very confident individual and comfortable with herself. I have worked with different people in the industry and there are actors who are very defensive if they face criticism. But Mallika is not like that. She speaks her mind and is very transparent. So it is good and easy to work with such co-actors."

Being the son of Jeetendra, a Hindi cinema icon, Tusshar has seen the creative and business side of cinema and entertainment very closely.

However, he said he learnt a lot of things on the job, and even made mistakes.

"I did grow up in a film family, but wasn't familiar with how a film set work, the craft of acting, make-up, fitness, camera angle... I have learnt everything on the job. But yes, I do understand what kind of stories people enjoy watching.

"So, whether it is Shor In The City or The Dirty Picture, I took part in those films. Those are really good stories. I came in during a transition period when the multiplex audience was growing," he said.

Though Tusshar's performance has been appreciated in multi-starrer films like the Golmaal series, after his debut in the film Mujhe Kuchh Kehna Hai, he never scored success with a movie which had him as a solo hero.

He has a positive take on it all.

"People will remember you for your last film. For an actor, if a fan thinks that I am good and entertaining, what else do I need?

"Yes, solo films would have been exciting, but just because a few of my solo hero films did not work, I cannot stop working on multi-starrer films that have a good story and good role. Having said that, from August I am starting a film that is tentatively titled 'Marich', with a new director and it is a solo hero film."