The trailer of the film carries a reprised version of the hit song Hawa Hawai from Mr. India 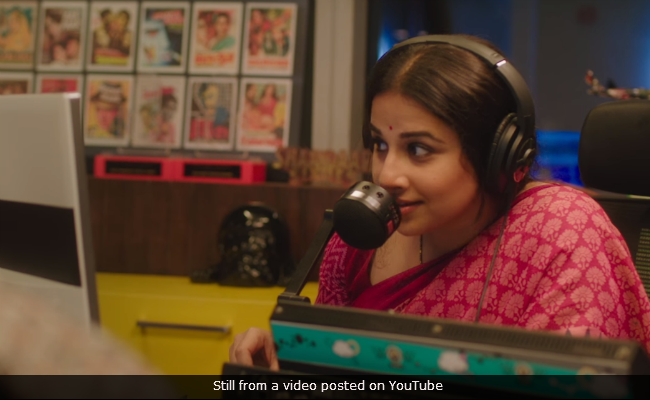 New Delhi: Yay! The trailer of Vidya Balan's much awaited fim Tumhari Sulu is finally here and we definitely can't keep calm because it's hilarious. The trailer, which was unveiled by Vidya on Twitter today, shows the life of Sulochana, a housewife and mother, played by Vidya Balan, who is extremely happy in her family life. Sulochana is a fun loving, energetic woman, who is looking for an adventure in her life. Later, the trailer reveals that Vidya, who is looking for a job as a radio jockey, finds the job and becomes the host of a sari waali bhabhi late night show and becomes really famous as 'Sulu.' Vidya completely won our heart with the trailer of Tumhari Sulu, which also shows how women are bound by traditional norms by the society.

The trailer of the film also carries a reprised version of the hit song Hawa Hawai from Sridevi and Anil Kapoor's 1987 film Mr. India.

Watch the trailer here which comes with a cute message: "Sometimes you don't need wings to fly."


It seems the trailer of Tumhari Sulu is already a hit. Filmmaker Karan Johar tweeted and wrote: "Vidya you are so so wonderful !!! Sulu is such a terrific slice of life character! Can't wait to see it!! Congratulations to the team!"

Vidya you are so so wonderful !!! Sulu is such a terrific slice of life character! Can't wait to see it!!! congratulations to the team! https://t.co/GXUWCD3dQE

Recently, the teaser of Tumhari Sulu was also unveiled by the makers of the film. In the teaser, Vidya's trainer asks her to sound 'sexy' while conversing with the listeners over the phone. "Sexy, sexy samjhati ho na tum?," he asks Sulochana. At a gym, Sulu stuns everyone as she is seen talking to a listener and she says, "Aapki raaton ko jagane, aapke sapno ke sajaane, main Sulu. Dil ke button se phone lagaiye aur mere se baat kariye. Karenge na?"

Promoted
Listen to the latest songs, only on JioSaavn.com
Vidya Balan was last seen in this year's Begum Jaan, in which she played the role of a brothel owner.

Tumhari Sulu is directed by Suresh Triveni and it also stars actress Neha Dhupia and RJ Mallishka. The film is scheduled to release on November 17.