Hawa Hawai 2.0 connects with the original song through the vocals of Kavita Krishnamurthy (who sang for Sridevi in Mr India) 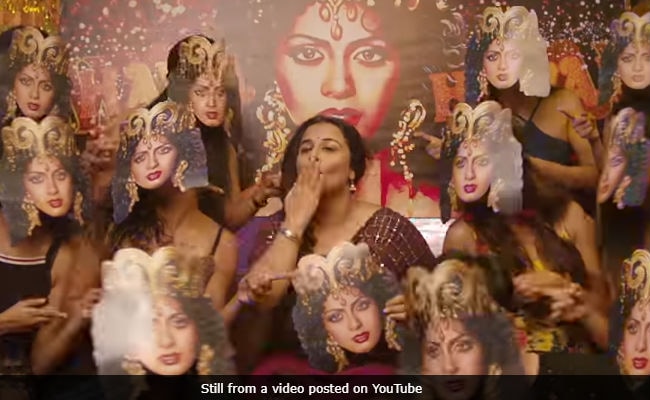 New Delhi: The best thing about Tumhari Sulu's version of Hawa Hawai is its connect with the original song -through the vocals of Kavita Krishnamurthy (who sang for Sridevi in Mr India) and of course, a sweet presence of the song's iconic star Sridevi (vis-a-vis a poster). Hawa Hawai 2.0 has been recreated by Tanishk Bagchi. Hawa Hawai 2.0 is the party number to be reckoned with. Hawa Hawai 2.0 is picturised on Vidya Balan, the titular Sulu, who becomes an overnight sensation by anchoring a late night radio show along with Neha Dhupia, who plays the radio channel head where Sulu works and Sulu's colleague played by RJ Malishka. Sulu's uninhibited dance moves as she celebrates her success with her new friends will put a smile on any sulking face.

Hawa Hawai 2.0 is on its way to become a huge hit after all, Sridevi, the original Ms Hawa Hawai , blessed the dance number. She tweeted the song's link and wrote: Wishing the team of Tumhari Sulu - Atul Kasbekar (the film's producer) and Vidya Balan - huge success and all the very best."

Wishing the team of Tumhari Sulu @atulkasbekar & @vidya_balan huge success and all the very best. https://t.co/a3r6df1fNd

Hawa Hawai was also reused by the makers of Shaitaan in 2011 but it ain't nowhere near to this or the original.

Promoted
Listen to the latest songs, only on JioSaavn.com
Tumhari Sulu is the story of a zesty housewife-turned-radio jockey, Sulochana aka Sulu, whose late night radio show becomes an instant hit. Sulu's new ambition interferes with her personal life and things become topsy-turvy.