True Story: When Chris Hemsworth Works Out, Everyone Is Inspired. Even Thanos

Chris Hemsworth is the worthiest of 'em all 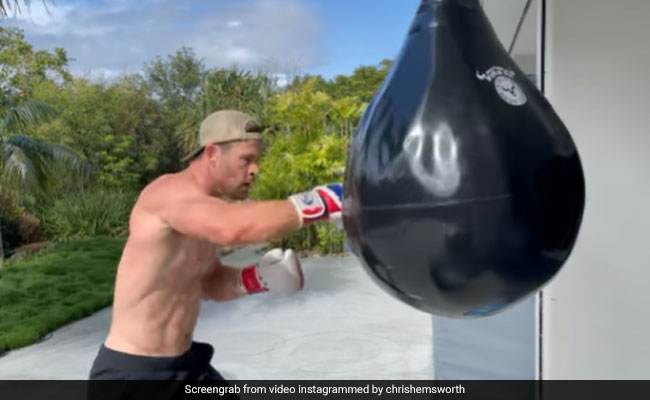 Chris Hemsworth in a still from the video. (courtesy: chrishemsworth)

When Chris Hemsworth works out, everyone is inspired to hit the gym. Even Thanos. Looking for context? Well, here's what happened. Chris Hemsworth, who is gearing up for the second season of Netflix's Extraction, posted a workout video, in which he can be seen doing boxing, squats, push-ups, reps and what not (more on that later). The comments section of his post was filled up with remarks from his fellow Marvel stars. Josh Brolin, who plays Thanos, wrote: "Damn! Once I finish this pizza, I'm going to do that." Aquaman Jason Momoa commented: "Boss." Jake Gyllenhaal, who stars as Mysterio, dropped bicep emojis. Need we say more?

Posting the workout video, Chris Hemsworth wrote: "Gearing up for Netflix's Extraction sequel. Transitioning from heavy weight training to a lot more body weight functional movements concentrating on agility, strength and speed. Give this little work out a go and let the lungs scream for mercy."

Chris Hemsworth is best-known for playing Thor in the Marvel Cinematic Universe. The actor stepped into Hollywood with the science fiction Star Trek (2009). He has also featured in films such as Snow White And The Huntsman, Red Dawn, Blackhat, In the Heart Of The Sea, Ghostbusters, The Cabin In The Woods, Rush and Men In Black: International.

The Matrix Resurrections Trailer: Keanu Reeves Goes "Back To Where It All Started", Priyanka Chopra's Intriguing Glimpse