"What a man on this arm," commented a fan on Chris Hemsworth's post 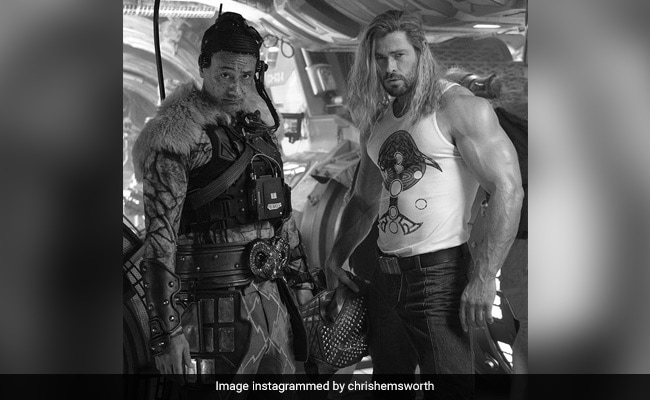 Chris with Taika Waititi on the sets of Thor: Love And Thunder. (Image courtesy: chrishemsworth)

Chris Hemsworth, who recently wrapped the shooting schedule of Marvel's upcoming film Thor: Love And Thunder, has been trending on social media since Thursday morning. No, not for his film. The actor, on Wednesday, posted a photo of himself and Taika Waititi from the sets of Thor: Love And Thunder and his huge biceps in the picture put him on the list of trends quickly. It's been a long time since we have seen the magnificent physique of the God of Thunder and with this new BTS picture from Thor: Love And Thunder, Chris Hemsworth just fulfilled our long-due wish on time. However, Chris' friends and fans can't take their eyes off his powerful and enormous muscles in his photo with Taika Waititi.

Reacting to the actor's post, surfer and artist Otis Hope Carey, who had painted a mural for Chris Hemsworth's Byron Bay bungalow, commented: "I reckon your arm is the size of my thigh." LOL. Fitness coach Torre Washington wrote: "Bro" with muscles and amused face icons while fitness trainer Marino Katsouris commented: "Can't wait to see that arm on the big screen." Artist Rob Liefeld commented: "Holeee SWOLL ARMS!" and Canadian music duo Young Bombs wrote: "Tell me you workout without telling me you workout."

Several users made reference to Chris' not-so-subtle caption and dropped ROFL comments on his post. The caption read: "That's a wrap on Thor Love And Thunder, it's also national don't flex day so I thought this super relaxed photo was appropriate. The film is gonna be batshit crazy off the wall funny and might also pull a heart string or two. Lots of love, lots of thunder! Thank you to all the cast and crew who made this another incredible Marvel journey. Buckle in, get ready and see ya in cinemas!"

A fan of Chris Hemsworth wrote, "'Super relaxed photo' *shows a picture of your muscles being the size of my whole body*" while another commented: "Are you sure you are not flexing?" One user commented: "What a man on this arm." ROFL.

Now check out the post by Chris Hemsworth that has taken the Internet by storm: